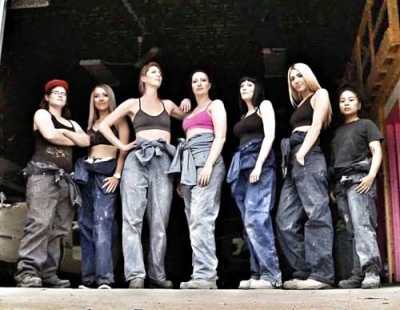 When Hilary Noack was a teenager, she noticed a flier about a festival in Long Beach, CA, called Ink-N-Iron. At the time, it featured old custom cars, tattoos and music.

“I thought to myself, ‘This embodies everything that I want my body shop to be someday,’” she recalled. “I’m going to name it Ink&Iron.”

Fast-forward 12 years later, and Noack now operates Ink&Iron body shop in Mississauga, Ontario, Canada, which focuses on restorations and minor collision repair work. One of the unique features of her business is that it is owned and operated by women. Plans are in place to expand to other locations in Canada and the United States with the first opening in Detroit, MI, in 2019.

Autobody News talked to Noack about her body shop and how she encourages co-op students and apprentices to learn the trade.

Q: Can you share how you started in the auto body industry?

A: I remember hanging around my dad when I was growing up while he was working on cars and tuning them up. I wanted to buy a car when I was 17 years old, and the only one I could afford was a 1970 Oldsmobile. It was pretty rusty, and I wanted to learn how to repair it. There was a body shop nearby where my parents lived, and I asked if I could work there as a co-op student during my last year of high school. They said yes, and I thought it sounded so cool.

From there, I transitioned straight into an apprenticeship program at Centennial College in their automotive division. I began working at 427 Auto Collision, one of the largest body shops in North America, after completing the third and final level of my schooling for the apprentice program.

Q: How did you decide to open your shop and employ only women?

A: I have known that I wanted to open my own shop since I started in the trade, but I knew it would need to be unique in order to stand out from the crowd. It was definitely a goal of mine. When I first started at 427 Auto Collision, I was the only female in the workplace. I was also the only female through all three levels of my schooling.