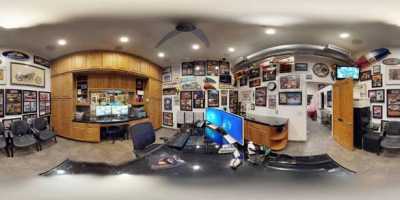 360-degree photo of the main office at Orlando Auto Body

When you walk into the main office at Orlando Auto Body in Mesa, AZ, one of the first things you’ll notice is the numerous magazine articles and awards that decorate an entire wall.

They are reminiscent of the custom cars Shane Orlando has worked on throughout his career.

He and his younger brother, Jason, began repairing and restoring cars and trucks as teenagers working out of a 600-square-foot garage. They quickly attracted the attention of car enthusiasts, classic car restorers and those who were involved in auto collisions. It wasn’t long before the brothers opened Orlando Auto Body in a 1,500-square-foot facility in Tempe, AZ, repairing about 100 vehicles per year.

Fast-forward to today---30 years after working informally from their parents’ home---and they now operate in Mesa out of a 12,000-square-foot building generating $3 million annually and working on more than 1,000 vehicles per year. With a primary focus on collision repair, the company has built a reputation for friendly service and quality workmanship, always putting safety first.

Autobody News recently visited the family-owned-and-operated shop and learned first-hand how the collision repair facility is addressing the tech shortage and uses digital marketing to enhance its business.

Q: Congratulations on your recent 30-year anniversary celebration at Orlando’s Auto Body. How did you get started in this business and where has your custom work been featured?

A: When I was 17 years old, I was working seven days a week, 15 hours a day. My brother, Jason, and I primarily focused on hot rods at the time. It was a lot of fun. Our custom work has been featured in more than 100 car magazines and television shows, including Truckin’ Magazine, Hot Bike Magazine, and at car shows at World of Wheels, Good Guys Car Show, the Low Rider Custom Car Show and the SEMA Show in Las Vegas. We have also done paint prototypes in the past for General Motors, Yamaha, Polaris and Kawasaki and created custom cars for many celebrities, such as boxing great Mike Tyson and Phoenix Suns’ Shawn Marion and Joe Courtney.