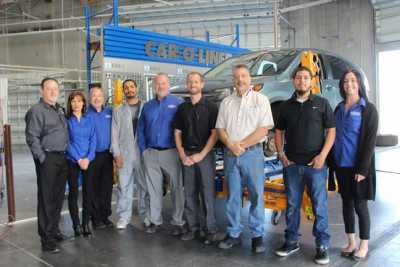 The team at New Look Collision’s new location in Scottsdale, AZ. This is the MSO’s first in the state of Arizona.

Named one of America’s fastest-growing companies in 2015 by Inc. 5000, New Look Collision has been referred to as a model collision repair center by its peers, customers and insurance partners.

The family-owned-and-operated MSO specializes in repairing European vehicles and has received numerous accolades since it opened its first location in Henderson, NV, in 2004.

In 2011, the company expanded its operations and opened an additional location in Shelbourne, located in the southwestern part of Las Vegas. In June 2017, Michael Whittemore and his wife, Theressa, bought out a competitor in Central Las Vegas. Their fourth location is adjacent to the Henderson shop and was built as an overflow facility. The Whittemores’ son-in-law, Paul Williams, is New Look’s general manager and is married to their eldest daughter, Jessica. Together, Paul and Jessica oversee the shops in Nevada.

With four locations in Nevada, the MSO opened a new facility in Scottsdale, AZ, in March. Autobody News sat down with Michael during the grand opening celebration on March 27 to find out how this entrepreneur started out in the collision repair business and learn about the processes he has incorporated over the years to operate and expand a successful MSO.

Q: Can you tell us about the journey that led to the opening of New Look Collision?

A: I grew up in the business. My cousin owned an auto body shop, so I spent time helping him out. I also enjoyed restoring old muscle cars. In 1985, I enrolled at a trade school in Johnson City, New York called OTC—Occupational Training Center. After the first year, my instructor, Mr. Heier, told me that I had a knack for doing this type of work and encouraged me to pursue collision repair after I finished school. I graduated from the two-year program at the top of my class out of 50 students. I was 20 years old at the time. The experience prepared me to work in the collision repair industry, but I didn’t realize how green I was.

OTC helped me find a job at a Porsche dealership in Vestle, New York. That’s when I found out that I was really green. I just knew the very basics. Fortunately, I had a couple of older technicians take me under their wing. After about a year, I worked at another body shop and then a Ford dealership.