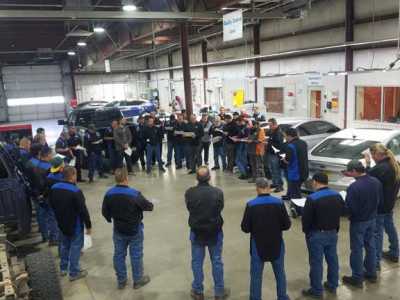 Jim Guthrie and his son, Sean, have always had a passion for cars---whether that has been repairing them, restoring them or racing them.

Currently operating Car Crafters in Albuquerque, New Mexico, the father-son team’s mission is “to be the body shop of choice for customers, insurance companies and employees, while providing the highest quality and safest repairs available today.”

As a teenager, Jim spent his free time repairing cars in his parents’ two-car garage. They eventually told him to either focus on college or open a body shop. Jim opened Car Crafters in 1982. When Sean was old enough, he helped out at the shop---sweeping floors, throwing out the trash and working on vehicles. He began working there full-time during high school and is currently the director of operations, overseeing all seven of the company’s locations. This includes managing operations, handling insurance company relationships and coordinating OEM certifications.

Sean said he and his father always had a great working relationship, with Jim working on the business and Sean working in the business. Autobody News spoke to Sean about the company’s recent growth and the unique program they offer that has helped the body shop attract and retain new talent.

Q: What prompted the decision to expand Car Crafters after so many years?

A: Over the years as the business grew, my father kept buying larger buildings. By 2015, we had a very, very large 80,000-square-foot single location earning $16 million a year. At the time, we were in the process of building a second location when we had the opportunity to acquire three additional facilities, which were owned by our closest competitor in the market. We opened those stores on April 1, 2015. Everyone thought it was an April Fool’s joke when we walked in and said that Car Crafters was acquiring them.

By the end of 2015, we finished construction on the shop we had already started, so within eight months we were operating five stores. Over the next year and a half, we added two additional locations---one in July 2016 and the other in January 2017. There was a lot of growth very quickly. Five stores are in Albuquerque and two are in Rio Rancho. We don’t have any plans to open additional ones at this time.

Since opening our most recent facilities, we’ve focused on organic growth, becoming more efficient at what we do and improving our cycle time.

Q: How did the company adapt from operating one location to seven in such a short period?

A: It was a challenge. Before the acquisition, I was managing our original location with one of our long-term employees, Kevin Weldon.

When I look back, it seemed easy to operate that store. Although we had a large staff of 80, it was like a big family because we had grown together for so long. It was a huge change for us to gain 50-plus employees suddenly.

Instantly, I took over the largest store we acquired and began implementing our company process and culture. The others were managed by my father and I as well as another long-term employee, Jim Snelson.

We spent the first few months cleaning the shops and reorganizing our staff. This included hiring new employees and training. There has been a lot of personnel movement. First, we did it out of necessity; eventually we made changes because we realized certain employees live closer to one of the locations or different personalities work better together. We’ve done some of the moves for the better of the business, and some moves for the better of the employees.

It was a whirlwind. I don’t know if we did it right or wrong, but we stayed successful through it all and now all of the locations are run very well. In hindsight, I would say we did it right, but I can’t tell you what the magic sauce was. It was just a lot of hard work.

Q: With this exponential growth, how have you staffed your business?

A: We’ve developed a good training program---the Car Crafters’ Training Program---to bring in kids from high school. If they don’t have money to spend and don’t know what they want to do---but like cars---they can come in as a detailer or floor sweeper and sign up for training. I developed a process that takes them step-by-step through the very early stages of dumping trash to being a disassembly technician. From there, they can pick their desired path: estimating, painting, body repair, parts department, etc. We use a lot of I-CAR training to supplement the program and it takes two to four years to complete, depending on how quickly they learn and how much talent and drive they have.

We’ve found that taking kids who are around 19--21 years old and letting them learn from the more experienced body men has benefited our business. Not only has it helped us staff some of our new stores, but it has addressed the problem this industry has---finding new talent while current employees keep getting older.