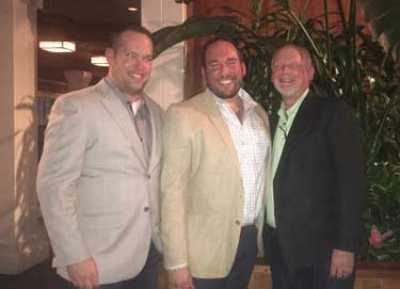 From left: Eric Newell, Andy Tylka and his father, Tom

Tom & Ed’s Autobody dates back to 1983 when Tom Tylka and his partner, Ed, moved their garage operation into a 2,000-square-foot facility in Schererville, Indiana, after quitting their jobs at an engineering company.

Tom spent time marketing the business during the day and repairing vehicles at night. The business arrangement soon became very stressful for the partners, and a few years later, Ed left the company.

“My dad decided to keep the name Tom & Ed’s because he had recently purchased signage and stationary,” said Tom’s son, Andy, who joined the company in 2009. “He felt the business was more about the products and services offered, rather than the name, so he put his finances into running the shop and keeping the lights on.”

Tom eventually purchased the building he was leasing, and over the next decade grew his business to include three locations. Tom & Ed’s opened three additional facilities, including a boat and RV division, during the last 18 months, bringing the total number of locations to six---all within a 15-mile radius of one another.

Andy has worked as CEO of the company since 2009. Along with Tom, the majority owner and chairman, the business’s leadership team includes Eric Newell, who joined the company five years ago.

Eric had taken a break from the collision repair industry and had become a full-time firefighter when he re-connected with Andy. The two had attended high school together and soon found out that they both had a background in the collision repair industry. Andy asked Eric to help out part-time at Tom and Ed’s working as a compliance manager. Recently, Eric was promoted to COO.

“We’re opposite but similar, so we are constantly looking at different sides of the business,” said Andy.

Autobody News talked to Andy and Eric about some of the strategies the company has put into place during the MSO’s recent growth.

Q: Can you tell us about the processes the company has implemented to help create a duplicable business?

Andy: Our goal has always been to take as much human error out of the company as possible. We do this by clearly defining our business process and sticking to it. We try very hard not to veer away from what we’re good at—collision repair and paint. When companies concentrate on restoration or special jobs, I feel like there are too many variables in the business. That can often lead to errors. When we know that there is just one outcome that needs to happen---the car needs to be repaired perfectly---we’ve found that it’s a lot easier to manage the business.

Eric: When I initially joined the company, it was the first time there was a compliance person who visited all of the locations. We noticed that each store was running a little differently than the others. This included how estimates were written, where parts were ordered, and who they sublet work to. As a result, we put our efforts into making sure everyone was on the same page. Each store now writes the estimate the same way and the process is consistent from check-in to delivery. Parts are ordered from the same vendors, which allows us to negotiate better deals. We are also able to move staff from location to location because they all understand the process and know what is expected. Not only has this change made it a lot easier to manage from a corporate standpoint, but it ultimately enables Tom and Andy to expand to new shops.

Q: What advice can you offer business owners who want to open multiple locations?

Andy: When we decided that we wanted to grow our business, we knew we had to build a corporate structure around that growth. That’s where Eric coming on board full-time has really helped. About a year ago, we had our paint company come in and spent two full days mapping out each of the corporate employees’ responsibilities. That has been extremely helpful. One of the reasons I believe we have been so successful is that we’ve aligned ourselves with good partners.

Eric: It’s very important to have a corporate business plan as well as a clear idea about what your business is going to be. Whether you are building a new structure from the ground up or acquiring another business, you want to ensure the decision is in line with your strategy. As we have added locations, we always make sure it is a good fit with Tom & Ed’s business plan.

Andy: I think a huge factor with multiple locations is being transparent with employees. I believe what sets us apart from other collision repair businesses is the education and ownership our staff welcomes into the business. I am very lucky to have employees who want to continue to learn self-improvement. Every quarter, we focus on four KPI goals for each facility to work on. Then we teach employees how they can influence those KPIs. As they grow in these fields, we tend to move on to other KPI goals for the next quarter. By being transparent with the staff and teaching them how to understand what their numbers are and how they are doing, it creates constant education and improvement.