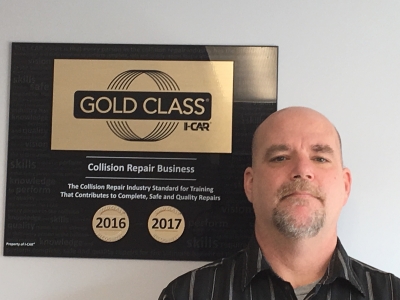 When Jim Pfau talks to his customers at Alan’s Collision Center, he often asks if they are familiar with their vehicle insurance policy. The general manager of the Philadelphia, PA body shop said that since the average person does not have a clear understanding of their policy, he takes the time to explain the issues associated with the repair process, such as labor rates and parts usage.

“Our mission is to ensure vehicles are repaired safely and returned to pre-collision condition,” said Pfau, who has worked in the industry since he was 16 years old. “We deliver the best customer service and workmanship possible and put our customers first…always.”

Pfau was hired in 2012 to modernize the business. Since then, the company has invested thousands of dollars annually in the latest, most advanced equipment and training.

Autobody News talked to Pfau about the importance of communicating to customers throughout the repair process, his views on scanning vehicles and the reason he thinks the shop consistently receives top reviews.

A: Honestly, it is simple. Listen to your customers, educate the customers, and keep them in the loop. Do quality work and sell yourself at the delivery. We show all of our customers the work performed and explain why it is important to review us. By the end of the repair, we usually wind up with a new friend. Google and Facebook are so important. Almost everyone reads reviews during a big decision and I understand the value of that.

We are NOT a DRP (direct repair program) shop, and we do believe in factory certifications. The industry is slowly changing, and I believe that over the next five years, certifications will be mandatory in order to keep your doors open. We do invest in our shop annually. The equipment we own is up-to-date and well-maintained. We are also an I-CAR Gold Class shop.

Alan’s Collision has a unique business model. We are certified for Ford F-150, Mercedes Benz, Hyundai, Honda and Nissan. A large percentage of our work is referred by two local new car dealers.

Our employees make all the difference. They are mature and work hourly so the work is top-notch and it shows. We have 15 people employed at Alan’s and most of them have worked here for over 20 years. We have a pair of twins who started right out of high school—Mike Kochis (lead metal tech) and Steve Kochis (lead painter). Mike and Steve have never worked in another body shop. The brothers are now in their 50’s.

Q: How has your background in the industry prepared you to work as general manager at the collision repair facility?

A: I spent all of my youth in my father’s garage doing restoration work. When I was 18 years old, I landed my first job at Faulkner Cadillac as an engine rebuilder. I was then hired at Acura of Huntingdon Valley as a lead technician and transmission specialist. Soon after, I was promoted to service manager. During my first year as a young manager, I won a trip to Aruba, all expenses paid for being number one out of 25 for customer satisfaction. Later on, I was promoted again to service director. I was in charge of four award-winning service departments. Our body shop manager had a heart attack and I was asked to take over collision. This was a huge adjustment, as I had never dealt with an insurer before. I felt it was time to move on and “fix” another business, so I went to work for a local MSO. Quickly, our store became number one in service and received numerous awards.

Once I had everything dialed in, it was time to move on to my next project. I worked for a local Chevy dealer that had a dying collision center. It took me five years, but when I left, it was well in the black.

Five years ago, I was asked to take over the store at Alan’s Collision Center and modernize it. This has by far been my biggest challenge yet, and the most fun. I have an awesome group of friends on Facebook. We exchange ideas and war stories every day.