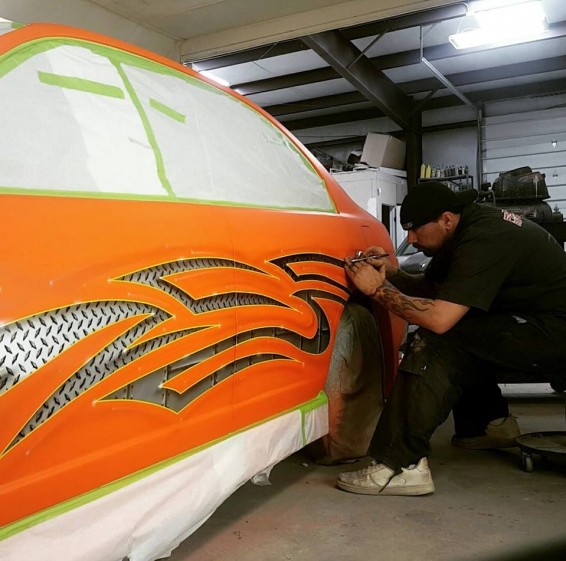 In Edmond, Oklahoma, Dave Foster recalls growing up in the 1990s during the mini truck era, learning about vehicles while shaving door handles and disassembling trucks.

The owner of Foster Auto Body specializes in collision repair and custom paint jobs. He is known for the work he has done on the Street Outlaws television series, which gives an insider’s look at street racing. Autobody News talked to the body shop owner, who refers to himself as a one-man show.

Q: What is it like to work on your own and what is your main area of focus?

A: I come in, turn on my music and go to work. I do everything… talk to customers, write estimates, body work/paint the cars, wash the cars, sweep the floor, etc.

I mainly focus on collision repair. That’s where you make the most money. However, I also focus custom paint (candy, airbrush art, etc.). I build all kinds of show cars from low riders to classics. I also work on custom motorcycles. Over the years, I've done just about everything—I've painted boats, a couple of party buses—even some airplane parts!

Q: I noticed that you have a large Facebook following. What do you attribute that to and how does it benefit your business?

A: I have over 11,000 followers on my shop’s Facebook page. It really blew up after working on the cars for the Street Outlaws television series on the Discovery channel. I think I had less than 200 likes when I first met with Varley (aka Wayne D. Varley), a racing legend in Oklahoma City. Varley asked me to work on his 1980 Ford Mustang, “The Gold Car.” After that, he shared my shop page on “The Gold Car” Facebook page.

A few months later, I met with Daddy Dave (aka David Comstock), the show’s reigning "King of the Streets.” He asked about doing all the paint and body work on the new car he was building, a Chevy Nova named Goliath. He brought the car to my shop and I went to work on it. He shared my shop page on the "Daddy Dave" Facebook page, which also helped my Facebook following.

I do get a lot of work from social media. It’s nice because people can actually see some of your work and read your reviews to get a feel for the shop before they call.

Q: On an interview you had with Mean Streets earlier this year, you talked about “The Gold Car.” Can you tell us about this vehicle featured on “Street Outlaws?”

A: I painted the car with House of Kolor Goldmine and a pagan candy clear over it. I had an old hood in the shop that I used as a test panel for our ideas until we found something that Wayne “Varley” liked. We ultimately decided to airbrush fire on the hood of the car. The day I painted it, I put in a 24-hour day. I was in the paint booth for 12 hours.

Q: Was Street Outlaws filmed at your shop?

A: My shop was featured on the show in 2015 during season 6, episode 5. The episode was called “Daddy Dave and Goliath VS the 405.” They filmed here in the shop when Dave was coming to pick up his vehicle—Goliath—from my shop. Unfortunately, the car got totaled a few months later in a drag race in Amarillo. After Dave had recuperated, he found another car and we went to work to build Goliath 2.0.

Q: How did you get started in the industry?

A: I always enjoyed sketching. I remember drawing on the back of my homework pages at school. When I was 18, I landed my first job at a small body shop named Custom Colors in Choctaw, Oklahoma. I worked there for Donnie Dukes as a painter’s helper and swept the floors and cleaned the shop. I learned a lot from Donnie who is now retired. He is knowledgeable when it comes to auto body work. After that, I worked for several different shops in the Oklahoma City area including Bodyworks, Fox Collision, OKC Auto Works and Flair.

I opened my shop in 2010 and work alone for the most part. I’ve tried to hire a few people over the years and it has just never really worked out. I think I just do better by myself.

Q: After being in business nearly seven years, what advice can you share with others just starting out in the industry?

A: The advice I would give from my experience is that you have to really want it because it's survival of the fittest. Never give up! If you get knocked down nine times, get up 10 times. I’ve put in some long nights, especially when I first started out in the business. I remember only taking time off during Thanksgiving and Christmas. I also didn’t have good credit when I started so I had to work extra hard to make it happen without any help from a bank. Now I work seven days a week, but I love what I do.

What I enjoy most is taking something wrecked and making it look new again or taking something old and rusty and then finding out it has received an award during a car show. I love a challenge. I’m that guy when people say it can’t be done, I do it.

View the embedded image gallery online at:
https://www.autobodynews.com/index.php/shop-strategies/item/13202-shop-strategies-owner-paints-cars-for-tv-while-running-shop.html#sigProId8ee9cf4ea5
More in this category: Shop Strategies: Owner of Swope Dealerships Receives Honor »
back to top