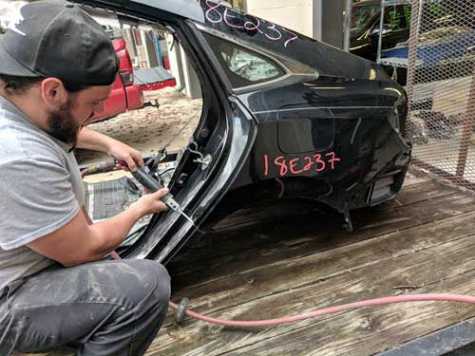 Chris Smith uses the hardness tester during NCACAR’s presentation to the NCDOI.

On Nov. 7, several North Carolina Association of Collision and Autobody Repair (NCACAR) board members conducted an off-site presentation with representatives of the North Carolina Department of Insurance (DOI) task force as part of a collaboration between the two groups to enhance knowledge of several main issues impacting the state’s motoring public.

According to NCACAR President Brian Davies, “These issues included differences in part types and how these parts can affect safety, but we are also working to gain a better understanding of telematics as it relates to new vehicle technology and customer communication.”

“Our main goal was to demonstrate for the representatives of the DOI the safety issues by enabling them to see, feel and compare part differences first-hand, which in turn helped in gaining knowledge of the operational hurdles faced by the consumer and the shops when choosing alternative part types,” Davies shared. “The vehicle I chose for this presentation was a 2018 Honda Civic because of its commonality and readily available parts e.g. new and used (LKQ), both certified and non-certified.

“The parts were organized and marked green for OEM and red for aftermarket throughout the paint department on tables, stands and the floor. All the new parts were marked for visual differences, weight and harness testing (when available). The used quarter panel, door and suspension were purchased to illustrate safety issues when OEM repair procedures are not followed, such as not duplicating factory-type welds, unknown origins and not tracing recall information, along with the obvious visual poor condition of the part itself.”

NCACAR is especially thankful to Burl Richards of the Auto Body Association of Texas (ABAT) for kindly mailing his hardness tester for use during the presentation. Chris Smith, production manager for Davies’ shop, aided in performing the tests and marking and organizing the parts.

The table below provides a sample of the tests performed and lists the weight and hardness as measured with three consecutive impacts to the same spot per the hardness tester procedure: GYSTEEL model ST 1200.

Davies explained, “It's obvious from the measurements that both the hardness and weight of these parts are different, specifically the progression of the hardness of the radiator support. The North Carolina Statute states, ‘Parts are required to have equal performance,’ and the differences were shown and explained to the DOI representatives in order to demonstrate how the parts may not meet the ‘like kind and quality’ requirement of the North Carolina law. We also shared a video produced by Honda that demonstrated when parts that have such glaring physical differences from original parts are used, the airbag timing is negatively affected to the detriment of the occupants.”

As the meeting drew to a close, Rogers shared his insights on the privacy concerns with telematics as they relate to steering, personal injury and automatic accident notifications, along with driving habits. Additionally, NCACAR sponsored and shared a several-hundred-page color binder with a multitude of industry information to serve as a resource to all the DOI representatives.

Davies concluded, “My hope is for this type of collaboration to continue with all the Departments of Insurance throughout the United States, so that we, as an industry along with our government, can continue to grow, advance and ensure consumer safety.”