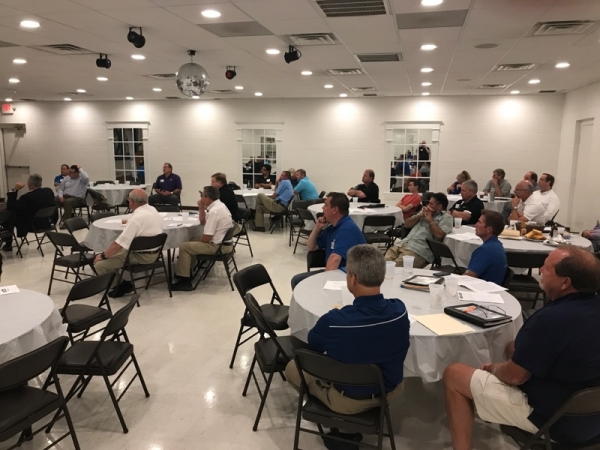 On Thursday, Sept. 21, the North Carolina Association of Collision and Autobody Repair (NCACAR) held a membership meeting at the Burlington Shrine Club.

According to NCACAR President Brian Davies, “The event was well-attended with approximately 85 people, and everyone was very interested and attentive to learning. They participated, engaging in questions and discussions.

“The main goals of the event were to provide negotiating tips, and to congratulate Mike Causey on his new office and welcome him back to our meeting. We had more attendees than anticipated with lots of RSVPs at the last minute, and we had three new shops join as members: Midtown Auto Body, Asheboro Body Shop, and Bill Black’s Chevrolet.”

Keith Manich, Director of Collision Services for the Automotive Training Institute (ATI), presented "Planning for and Executing Successful Collision Repair Negotiations," and Davies praised the seminar as "an extremely educational piece on negotiating."

LIABRA's Executive Director Ed Kizenberger was also in attendance to discuss legislative issues, particularly timeframes related to first-party appraisal inspections and any re-inspections for supplemental damages. The presentation also focused on future legislative and regulatory initiatives, as well as discussed knowing your legislators and understanding the legislative process. A question and answer session followed.

Attendees were especially excited to hear from newly elected NC Insurance Commissioner Mike Causey, who spoke to the group with four of his new employees.

Davies shared, "Mike was supportive of our association and outlined the responsibilities under his control, which is a huge list of duties. He was able to hire 46 additional new personnel, one of which will be dedicated to handling specific issues with auto body complaints and hopefully reducing the time required to deal with an urgent issue. In addition, he outlined how best we as a group can create change in our industry, which is through a personal relationship with our local elected officials. So to help our members find their elected officials, we will create a link through the NCACAR website to the North Carolina site to encourage involvement with the people who can influence change."

Causey is also in the process of opening an office in Charlotte, and when asked about the issue of photo claims, Causey promised that he is investigating the complaints lodged about unqualified people writing these estimates, leaving his constituents driving unsafe vehicles.

According to NCACAR Board Member Elijah Winans, "Commissioner Causey gave our attendees an inside perspective into the complexity of the NC Department of Insurance and explained how we, as an association, can make impactful changes. He displayed acute knowledge of our industry’s challenges and voiced that participation in associations like NCACAR foster the greatest opportunity for positive change."

"Mike understands the issues we face as an industry, and he stated he is committed to helping us improve the sustainability of the collision industry in North Carolina. In addition, he is well aware of the positive impact we are making as an association to keep his constituents safe in correctly repaired cars," Davies added.

During the meeting, Davies also took the opportunity to share some of his experiences from ABAT's Texas Auto Body Trade Show, including a recap of Todd Tracy's discussion on how to "keep sharks like him from swimming in your shop." Davies discussed the 13 safety rules on following OEM specifications, educating the consumer, scanning, documentation and general ethics, such as the fact that the customer's safety is more important than a shop or insurer's profit margin.

"It was a good vibe as we celebrated our one-year anniversary,” Davies said. “Our goal was to share information and create an environment of learning, friendship and support. The facility was nice, and we enjoyed a great steak and potato dinner. PPG helped sponsor association t-shirts that we sold, and quite a few industry vendors came to support the association. We raised around $2,500 to help our endeavors to sustain the industry in our state, and at the end of the night, everyone seemed really happy as they interacted with their peers."

"The September meeting of the NCACAR was another step forward in the association’s progress toward our mission to continually improve the professionalism and business practices of those engaged in the collision repair industry through education, initiatives and strong leadership,” Winans added. “We continued our momentum of education and leadership by hosting several speakers. The meeting also gave us an opportunity to set in motion the process of introducing legislation and reform in NC that will have a lasting impact on our industry. The proposals that the NCACAR supports are only possible with strong and motivated leadership relying on member support. The meeting was well-attended, and the participation was robust. NCACAR still needs more members and support to continue our progress."

NCACAR's Board of Directors held a meeting before the member meeting in which they discussed recent improvements to the association's website and plans for 2018. The association will hold its next meeting in mid-January, but hopes to attract some industry favorites to speak at the next meeting.