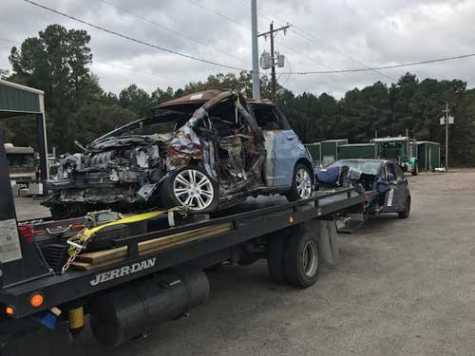 Todd Tracy provided the Seebachan crash car and the aftermarket crash car that was repaired by ABAT’s Burl Richards.

The meeting’s focus was on prioritizing safety.

According to HABA President John Kopriva, “It went really, really well. Although the rain and sleet prevented some folks from coming, we still had over 100 attendees, and the venue was perfect. The whole event was excellent.”

Todd Tracy provided the Seebachan crash car involved with the John Eagle Collision decision made in October 2017 and the aftermarket crash car that was repaired by Burl Richards, president of the Auto Body Association of Texas.

Both vehicles were on display in the parking spaces directly outside of the ballroom where the seminars were held.

“Those parking spaces belong to AVIS Budget Rent-A-Car, but they made them available to us so meeting participants could look at the car. The Seebachans’ car was so badly damaged that you couldn’t even determine the make or model of the car. I don’t see how anyone could have survived that,” Kopriva said.

The meeting began at 9 a.m. with HABA recognizing the veterans in attendance in honor of Veterans Day. Acting as emcee for the event, Collision Advice’s Mike Anderson explained that the purpose of the meeting was to stress safety over profitability.

Anderson began his presentation by detailing how shops can better identify and document everything necessary to perform a safe and reliable repair. He also shared statistics about where he believes the industry will be in the future. He encouraged everyone to participate in his “Who Pays for What?” survey and challenged HABA to increase its participation. HABA accepted the challenge to have 50 shops participate in the current survey.

Kopriva noted, “Mike did a great job. Talking about where he feels the industry is headed, he told us that he believes many shops will be left behind if they don’t bring their processes up to the standard and prepare for the ongoing advances and changing technology on automobiles. He quoted Wayne Gretzky, who said, ‘Don’t go where the puck is, but where it’s going to be.’ Rather than worrying about where the industry is today, we need to be looking at where it will be in the future. Mike is always really high-energy, so he held the crowd’s attention and everyone really enjoyed his presentation.”

Next, Tim Ronak, senior services consultant for AkzoNobel, presented “Severity Doesn’t Matter,” during which he discussed the effects of working with insurance companies, including unrealistic severity expectations.

Kopriva recalled, “He gave an example of a shop that was a DRP for a major insurer, but they were faced with the dilemma of trying to keep their numbers within severity metrics when the repair procedures called for use of new wheels. The shop knew it would drive severity well above the insurer’s expectations and they’d be taken off the program, but they put the wheels on and indemnified the insurance company, which Tim said is not the business of the collision repair industry. He walked around the room while he presented and really engaged the attendees.”

Although Tracy was scheduled to speak during HABA’s Fall Conference, he had to cancel to be in court that day. However, HABA obtained a copy of the video Tracy made during ABAT’s trade show in September to show attendees. Unfortunately, they ran out of time to finish it, so Anderson promised to send the video to all attendees via email.

During lunch, Dan Parsons, president of the Better Business Bureau (BBB) of Greater Houston, spoke about how shops can better instill trust within the motoring public and build trust with their customer base. He had staff members present and hand out information and answer questions from shops interested in joining the BBB. He also explained that customers can go to the BBB and pull up stats on participating shops to get a historical perspective on ratings and comments.

In the afternoon, HABA held a panel discussion with Ronak, Anderson and Greg Griffith of AkzoNobel, who answered many questions from attendees about steering, labor rate suppression and other topics related to members’ businesses.

“The panel really addressed exactly what our members were asking. This session allowed people to share their thoughts and concerns directly with the panel, and I was really pleased that they asked such good questions. It could have gone on a lot longer than it did, but we only had so much time,” Kopriva said.

Larry Cernosek, legislative coordinator for HABA, then discussed the pending house bill that HABA will be lobbying for as well as the association’s Collision Day in February, for which they will go to Austin to meet with legislators. HABA will also be bringing the Seebachan and aftermarket cars with them to help them explain that they are stressing safety as a priority in 2019.

As HABA’s 2018 Fall Conference drew to a close, Kopriva wrapped things up by bringing everyone up to date on what HABA has been doing as an association, such as trying to get the motorists’ bill of rights enforced. He also provided an overview of where they are headed in 2019. HABA will hold a planning meeting in January as well as the Legislative Collision Day in February. The association also plans to do many more training sessions and seminars for technicians this upcoming year.

View the embedded image gallery online at:
https://www.autobodynews.com/index.php/sa/item/16776-haba-fall-conference-delivers-valuable-information-to-attendees.html?showall=1#sigProIdf1997f0b47
More in this category: « ASA-CO Learns to Create, Empower Championship Teams HABA Shoots the Breeze (and More!) With Sponsors »
back to top