Retro News: Database Enhancement Gateway Got its Start 10 Years Ago 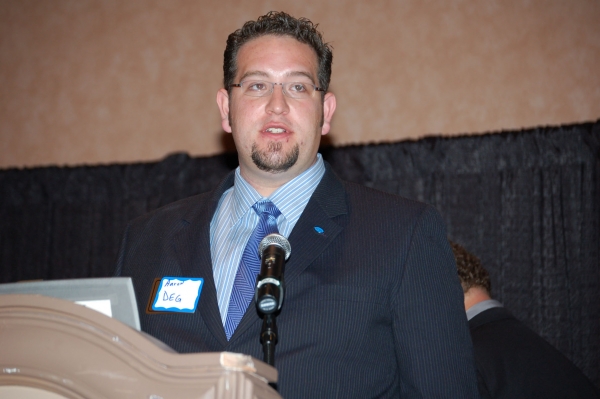 In 2008, Aaron Schulenburg was named the first administrator for the Database Enhancement Gateway, about a year before he became executive director for SCRS.

20 Years Ago in the Collision Repair Industry (January 1998)

One insurance company is not only calling for the use of non-deployed airbags from salvaged vehicles, but is actually selling the units to repair shops.

At the Collision Industry Conference in Las Vegas, Earl Cameron of Saskatchewan Government Insurance (SGI) said his company has been selling airbag units to repairers from SGI’s salvage vehicles for about a year. SGI insures all of the 860,000 vehicles in the Canadian province. Like insurers in other provinces, SGI meets regularly with auto dealer and repair shop associations to reach agreements on REITs, repair practices, etc. But unlike most other insurers that sell salvage vehicles whole, SGI dismantles its salvage vehicles and sells parts, including airbags.

“Because of our unique position of having these parts available, because of the concerns of controlling our claims cost, when we met with the repair industry, we made an agreement that for vehicles where the airbag had been deployed, we would provide recycled airbags that we were in possession of for the exact make and model of that vehicle, including color match,” Cameron said. “We started that at the end of 1996, and it was well-received by the repair industry. What we are trying to do is repair as many vehicles as possible. The more total losses we have, [the more] our costs go up. The more vehicles we repair, the happier our customers are, and certainly the happier the repair industry is. It’s a win-win situation.

“One of the other reasons that we wanted to use these up is that the airbags that were undeployed had been sold, and SGI had no way of knowing where they were going, whose vehicle they went on, and whether the customer actually knew they were getting a used or undeployed airbag. So by doing this, we provide the airbag to the repairer. The industry acceptance of that is because we’re providing the airbag, we know which vehicle it came off of, how many miles are on it [and] what type of accident it was in. That was the control they wanted from us to make sure they weren’t getting an airbag that may have been damaged or not properly stored.”

Cameron admitted that his company has not done any crash testing of vehicles in which the undeployed airbags were installed.

– As reported in Collision Expert. No major U.S. auto insurers have moved toward calling for the use of salvage airbag modules.

15 Years Ago in the Collision Repair Industry (January 2003)

Auto recyclers had to cringe at the results of a Collision Industry Conference (CIC) committee’s latest demonstration.

As it did earlier this year, the CIC “Parts and Airbags Committee” had a local shop order the same type of part---in this case, a decklid with taillights for a 1990 Honda Civic--- from three different salvage yards. The shop was asked to use yards it normally does business with, and not to disclose that the parts were being used in a CIC demonstration.

All three of the parts that arrived and were displayed at CIC would pose challenges for the collision repairer, according to Jeanne Silver, co-chair of the committee. One was a 1998 Honda decklid, which would’ve fit the vehicle, but was not the same model year or newer as required by some insurers. It also took two business days to arrive at the shop, and while the auto recycler described the part as [being] in “good condition,” many at CIC described it as having “light damage.”

One of the other parts, which arrived the day after it was ordered, was in good condition but was even older (1997), arrived with no taillights, and was identified on the invoice as a 1998 part with taillights and hinges (also missing).

Based on the lack of a VIN sticker and its significantly lower mill thickness of paint, the third part was determined to be an OEM service replacement part that had been previously repaired. Also described by the salvage provider as being in “good condition,” the decklid had a damaged taillight, and collision repairers used such words to describe the overall condition as “moderately damaged” and “junk.” On the upside, it arrived at the shop just two hours after it was ordered.

Silver said any number of problems with the decklids – their age, condition missing parts – could’ve created cycle time delays for the shop.

– As reported in Autobody News

10 Years Ago in the Collision Repair Industry (January 2008)

Three collision repair associations are jointly launching what they foresee as a key tool in helping the industry improve the accuracy and fairness of the estimating databases.

After more than a year of planning and development, the Database Enhancement Gateway (DEG) is going live with its website, providing a single place for anyone in the industry to submit requests for reviews of labor times or operations in any of the “Big Three” estimating databases.