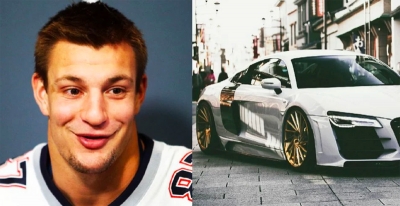 The four-time Super Bowl champion seems to have a particular taste for high-end luxury and power.

Anybody that watches the NFL know the name Rob Gronkowski, or "Gronk", a four-time Super Bowl champion who played for the New England Patriots for nine seasons. He joined his teammate Tom Brady to kick off the next season with the Tampa Bay Buccaneers, and took it to the Super Bowl, where they absolutely dominated for the win. Gronk was a five-time Pro Bowl choice, a selection for the First-Team All-Pro four times, and was picked to play for the NFL All-Decade Team. With a big bank account thanks to those fat NFL paychecks, especially being a Super Bowl champion three times over, Gronk has a collection consisting of a few high-end cars with his hard-earned cash. One of the luxury cars in Gronk's stash is this Mercedes-Benz S63. AMG is the performance side of Mercedes, and they outfitted this car with a twin-turbo 4.0-liter V8...