On The Lighter Side: Hyundai Unveils Autonomous Four-Legged Walking Car 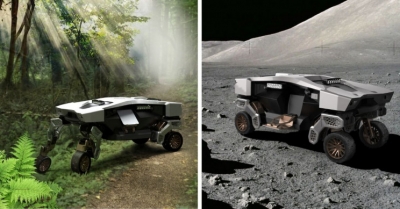 Transportable by UAV, the Tiger X-1 concept can travel through jungles, caves, and even space terrain.

Hyundai's crazy Elevate walking car concept, unveiled in 2019, may be more than just a publicity stunt after all.

A variation on the 2019 model, Tiger X-1 is transportable by UAV and can traverse the harshest terrains --- including the surface of the Moon. Hyundai's Tiger X-1 is envisioned as an uncrewed explorer of the harshest terrains. Source: Hyundai

In December of last year, Hyundai bought a $1.1 billion majority stake in Boston Dynamics, showcasing its belief that robotics will play a large role in the future of mobility.

Unveiled on Tuesday, Feb. 10, The Tiger concept was devised before the Boston Dynamics acquisition.

Much like the Elevate concept, the Tiger X-1 transforms from an electric four-wheel drive into...