On The Lighter Side: Volkswagen Unveils Its e-BULLI Crossover Between a High-End Classic and an All-Electric Vehicle 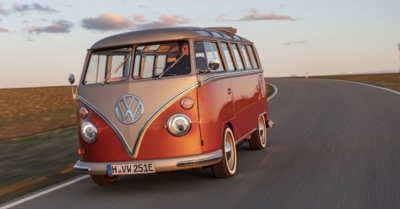 Volkswagen Commercial Vehicles (VWCV) has presented its new e-BULLI all-electric vehicle to the world. It's a stunning crossover between a classic 1966 minivan with all the latest drive system components of a modern VW electric vehicle.

Producing zero emissions, the e-BULLI concept vehicle is based on the 1966 T1 Samba Bus that's been entirely restored.

The vehicle was meant to take to the stage at the Techno Classica 2020 in Essen, Germany, but given the present global circumstances, it has instead unveiled it virtually.

From old into new

One point VWCV wants to make clear is that the e-BULLI will be available to buy for real, and isn't just a pretty virtual reality tour. VWCV engineers formed a team along with drive system experts from Volkswagen Group Components, and the eClassics company to switch an iconic Bulli into a system that produces zero emissions. They knew they wanted to use a T1 Samba Bus and change it so that it uses...