On The Lighter Side: Red Rod Rides Again 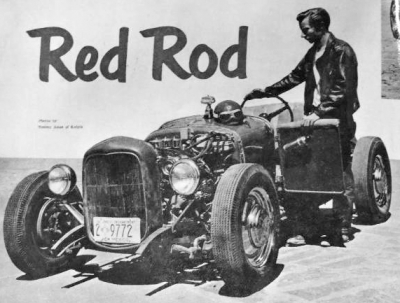 In the days before you could buy a rubber-burning, heart-stopping-speed muscle car off a car dealer’s lot, high-school boys with a need for speed and a few bucks in their pocket built their own “muscle cars.”

In the 1950’s they were the pioneers of hot-rodding. Mahlon Love of Albuquerque, NM was one of those teens. In 1953, Love was 17 years old. He had spent several years and $2,800 that he made while working part-time as a bus mechanic building his own hot rod called Red Rod. It is said that he may have received some help and expertise from the renowned Unser family of racing fame. Typical of the time, the car had a 1927 Ford Model T body secured to a 1932 Ford model B frame. The frame and firewall were altered to make everything fit. It featured a highly modified 274CID 1948 Mercury flathead V8, chromed Clark headers with an exhaust dump which could be opened for racing.

Top-side it featured Evans high-performance heads and two interchangeable intake manifolds, one, made by Edelbrock, was matched with four Stromberg carbs used strictly for racing. It also featured Mallory ignition, a Cadillac radiator for cooling and Steward Warner gauges fitted to an all-business dashboard. Steering was taken from a 1940 Plymouth and the transmission and rear end “borrowed” from two different Fords. The car was painted a bright “Chinese red.”