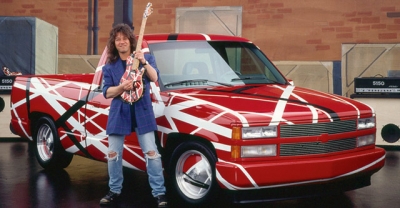 Fast cars and fast tunes go hand in hand --- especially when you're talking about Van Halen.

On Tuesday, October 6, Eddie Van Halen lost his battle with throat cancer and passed away. He was 65 years old.

He's well known and well-respected as one of the greatest guitar players of all time, but he was one of us, too. Eddie Van Halen was a car enthusiast of the highest order. The best-known car in his collection was his Lamborghini Miura. As he grew in popularity through the 1980s, Van Halen reportedly owned a string of Lamborghinis. It's safe to assume that the Miura was his favorite, considering it was the one he kept around the longest.

The reason we know the Miura so well is that it once served as a backup singer alongside original Van Halen bassist Michael Anthony. You can hear its engine revving during the "Runnin' a little bit hot tonight..." portion of Panama.

Legend has it that Eddie backed it up to the doors of the recording studio, and the engineers stuck microphones in the exhaust pipes. The rest is rock & roll history. He also had an affinity for Porsches, too. In an interview with Car and Driver, he praised his 911 GT3 RS, saying that it handled better than any Porsche 911 he'd owned previously.