On the Lighter Side: 1968 Ford Mustang From "Bullitt" Goes for $3.74 Million at Auction 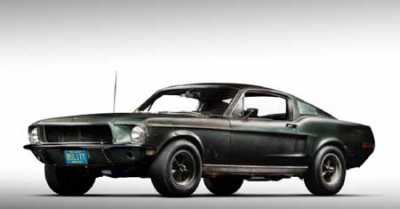 In 2018, Ford announced it had found the original 1968 Highland Green Mustang from the movie Bullitt and the internet went crazy.

That's why it was not surprising to see the car fetch a whopping $3.74 million at auction, making it the most expensive Mustang ever sold at auction.

The Mustang was sold by Mecum on Friday, January 10, in its Kissimmee, Florida auction house. "In 1968, “Bullitt” cemented itself as the pivotal moment in the history of car chase scenes, doing what none had ever done before and setting the standard for all that would follow, earning it the badge of honor that it carries today as the single greatest car chase scene in history. This Highland Green 1968 Ford Mustang GT—the hero car driven by the “King of Cool,” Steve McQueen, in the iconic 1968 film “Bullitt”—is the one that started that enduring legacy," wrote Mecum on the Mustang's webpage.

The excitement behind the car lies in the fact that it was one of only two cars used in the movie and that it was the primary car used in the filming. It features in what is considered the best car chase scene in movies ever.

It also has an interesting history. After the film, it was sold to one family and stayed in their hands for decades, only showing up at the 2018 Detroit Auto Show for the unveiling of the latest Bullitt edition Mustang.

"The fact that [the Bullitt Mustang] had disappeared for decades, only to reemerge as an unrestored, movie-car time capsule is something we'll likely never see again in our lifetimes," said McKeel Hagerty, CEO of classic car insurer Hagerty, in a statement.

More in this category: « On the Lighter Side: Ford Is Turning McDonald's Coffee Waste Into Car Parts Finally, the Iconic DeLorean DMC-12 Will Be Back in Production »
back to top