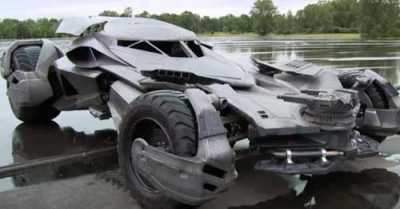 If you're a Batman or a car fan, you'll be glad learning that a team of engineers from FastBoomPro in Russia put together a Batmobile that beautifully replicates the Dark Knight's vehicle of choice.

It is likened to the Batmobile used in the 2016 Batman v Superman.

FastBoomPro founder Alisher, who refuses to share his last name, told Russia Beyond "I saw it in the movie, and just had to recreate it. It had to ‘shoot,’ ‘fly,’ and ‘roar’ like a real superhero ride."

The bodykit was purchased in the U.S. What's impressive is that the initial chassis and engine that were part of the bodykit only allowed the car to reach 30 km/h, as it could only move in first gear.

According to Alisher, "All the chase scenes in the movie are shot at a speed of 20 km/h, and then special effects are added in the studio. We had to do a lot of things [to turn the bodykit into a real car]. We inserted a 502-hp V8 engine and made a number of technical modifications so that it wouldn’t fall apart on the move." To begin with, FastBoomPro's engineers installed new axles with different metal alloys to keep the Batmobile's wheels on the road, and they rewelded the chassis.

Now, the Batmobile can reach up to 100 km/h. Even though that may not seem like a high number for what seems like a sports car, Alisher, in fact, notes that this is more of a toy car than a sports one. Moreover, measuring four meters in width, it's not road friendly as it takes up most of the two lanes.

Even though it may not be the next racing car, it boasts extremely cool special features. It has a fake machine gun complete with audio, a night vision camera, a laser sight, a thermal imager with 255x zoom, and bulletproof windows. This isn't FastBoomPro's first Batmobile rodeo, though. Three years ago, the company made a replica of the 1989 Michael Keaton Batmobile, which sold for approximately $1,100,000.