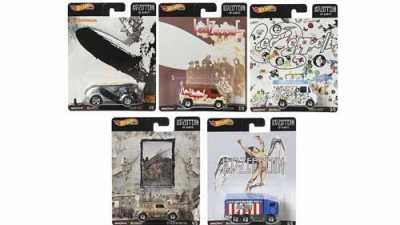 A new Hot Wheels car collection is hitting the shelves, and it will be perfect for the Led Zeppelin car enthusiast in your life.

The first one is called "Haulin' Gas," and it is a black and silver tour bus from the late-1960s. The tour bus features the Hindenberg disaster from the band's self-titled debut album that was released on Jan. 12, 1969 in the United States and on March 31 in the United Kingdom. Up next is "Super Van" which was created in Hot Wheels Real Riders style and features the band's name in pink font complete with the smoke found on the Led Zeppelin II album. The rear of the van features the saying "The Brown Bomber," the band's nickname. Even more, a vanity plate reads "LOTALUV" which pays homage to Led Zeppelin's "Whole Lotta Love" song.

The third vehicle is a white van called "Combat Medic" that is adorned with the same psychedelic art featured on their third album, Led Zeppelin III. Number four is the all-gold "67 Austin Mini Van" that embodies the band's untitled fourth album. Four symbols can be found on the panels with each one representing a band member, and on both sides of the van is the featured cityscape from the record's cover. Lastly, the "Hiway Hauler," a touring truck with a large American Flag that represents their 1975 North American tour. It features the Swan Song logo on both sides in the font Led Zeppelin is known for. Every city the band visited on the '75 tour can be found in detail on the gas tank. This is the only one that doesn't go along with an album.

Each one of the 1:64 scale models are an official Hot Wheels product by parent company Mattel, and they are all sold separately. This Led Zeppelin collection is called "Mix 1," so there may be another run of other LZ Hot Wheels down the line.

View the embedded image gallery online at:
https://www.autobodynews.com/index.php/on-the-lighter-side/item/19147-on-the-lighter-side-led-zeppelin-introduces-hot-wheels-car-collection.html#sigProIddfdf2597ef
More in this category: « On the Lighter Side: You Can Still Bid on the WD-40® SEMA Cares 1966 Ford Bronco On the Lighter Side: "Batmobile" Sold for $850,000 in Russia »
back to top