On the Lighter Side: You Can Still Bid on the WD-40® SEMA Cares 1966 Ford Bronco 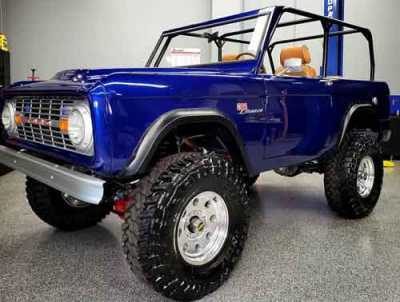 You still have a little more time to bid on this WD-40 SEMA Cares 1966 Boosted Ford Bronco by accessing BringaTrailer.com. WD-40

If you have a few dollars burning a hole in your pocket and want to acquire a showstopping vehicle while raising funds for a worthy cause, read on.

The WD-40® Brand is cruising into the new year by auctioning off an iconic cult classic, a 1966 Ford Bronco on BringaTrailer.com through Jan. 13 to benefit Childhelp®.

Attendees at the 2019 SEMA Show were able to see the vehicle in person at the WD-40 Brand booth. All the proceeds from the auction will go to ChildHelp, a nonprofit organization dedicated to the prevention and treatment of child abuse. To bid on the Bronco, visit: bringatrailer.com/listing/1966-ford-bronco-20/. At the time of this publication, the top bid was $57,500 with brisk bidding anticipated right up until midnight on Jan. 13.

Each year, WD-40 selects a vehicle rebuilder for its reputation and skillset to work on its SEMA Cares car. This year it was LGE-CTS Motorsports of San Dimas, CA, with Louie Morosan and his two daughters Theresa and Sarah working side-by-side to make the Bronco a showstopper.