On the Lighter Side: Elvis Presley Vehicles Sold at Auction 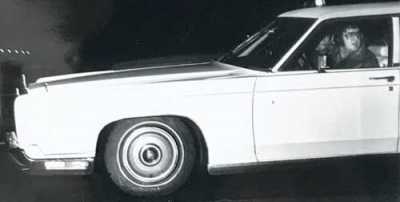 When it comes to cars, Elvis Presley is probably best known for his pink Cadillac, but he had amassed quite a collection of vehicles in his career.

Back in August, Kruse GWS Auctions held its "Artifacts of Hollywood" collection containing several vehicles owned or driven by The King. Perhaps the most well-known of these cars is a 1973 Lincoln Continental limousine that Elvis was often spotted driving around Memphis, TN, including one instance where he was photographed behind the wheel of the car while stopped for a car accident. This white-on-white stretched limo has a television and other luxury amenities. This limo was auctioned off for $75,600. Elvis had a collection of equipment (including a John Deere tractor, which is part of the Elvis Presley Auto Museum near Graceland) for use at his Circle G Ranch in Mississippi, and one such vehicle is this fully restored 1967 GMC C10 pickup truck. Elvis purchased three such trucks in 1967, but they were later sold back to the dealership by his father. This cool GMC sold for $30,000. The King definitely had an eclectic mix of cars to match his personality, and this 1974 Rupp Centaur is one of the more unique. This three-wheeled motorcycle was ordered at the same time as an identical Centaur – now housed in Graceland – but this one was delivered to Elvis at a later date. It was documented on CMT's "Raiders of Rock" series back in 2013, and it sold at this auction for $23,000.