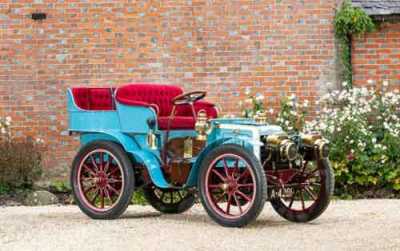 It was later sold to British enthusiast, Leslie Bucknall for twice its price and taken to England where it was given the name "Le Papillon Bleu" by his daughter Vivienne.

It ended up in the hands of Veteran Car Club President Tom Lightfoot, who drove it on the 60-mile London to Brighton vintage car rally.

View the embedded image gallery online at:
https://www.autobodynews.com/index.php/on-the-lighter-side/item/18921-on-the-lighter-side-pioneering-prototype-of-the-modern-motor-car-heads-to-auction.html?start=1#sigProId0e2f8805cc
More in this category: « On the Lighter Side: Only Five 1931 Duesenberg Model J’s Exist and One is for Sale On the Lighter Side: Jaw-Dropping Custom Big Rig Took Seven Years and $7 Million to Build »
back to top