On the Lighter Side: Researchers Train Rats to Drive a Make-Shift Tiny Car 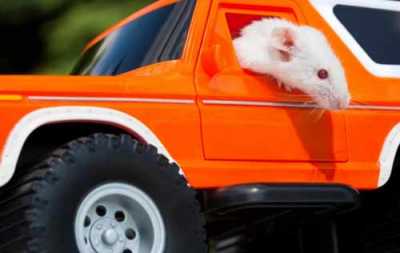 Rat behind the wheel of a toy car. JamesBrey/iStock

Rats may be smarter than we think, with a team of researchers able to train them to drive a tiny car.

The scientists, led by Kelly Lambert of the University of Richmond, wondered if rats could be trained to carry out tasks that are more sophisticated than finding their way through a maze or recognizing objects. Turns out they are able to drive a tiny makeshift car if there is a Froot Loop nearby.

NewScientist reported the car was made out of a food container that was clear. Wheels were affixed to it and three copper bars served as the steering wheel. The car was placed in a rectangular track that had an aluminum floor. When the rats grabbed the copper bars and stood on the floor it moved the vehicle. The three bars when pressed individually either turned the car left, right or center. The researchers were able to train 17 rats to drive the tiny car. They received a Froot Loop every time they touched the copper bars and the car moved forward.

To test their driving skills Froot Loops were placed at points further down the track. The rats were able to navigate and use new steering patterns to get to their reward.

Rats Less Stressed Out From Driving

The researchers found that learning to drive appeared to calm the rats. They determined that by measuring the levels of cortisol, the culprit for stress and dehydroepiandrosterone, which relieves stress. They found the ratio of dehydroepiandrosterone to cortisol increased as the rats were trained to drive. In previous work, Lambert has found that rats are less stressed when they accomplish a tough task. Lambert said it could be the same feelings humans get when they master something that is complex or perfect a skill. “In humans, we call this self-efficacy or agency," said Lambert in the report.

The fact that rats can drive shows their brains are capable of responding to challenges. “I do believe that rats are smarter than most people perceive them to be, and that most animals are smarter in unique ways than we think,” Lampert said in the report.