On the Lighter Side: The Ten Weirdest Cars in the World’s Most Bizarre Car Collection 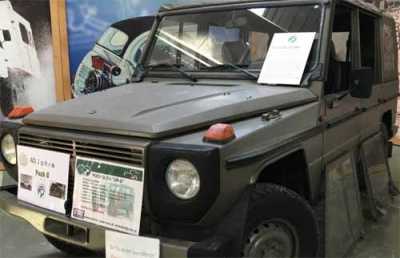 An automotive supplier – especially one tucked away in a small industrial city in southern Austria – is an unlikely steward for a car collection this diverse.

The large, dusty collection is a monument to what has been accomplished by Magna-Steyr, the series of firms that can trace its roots to the Austrian inventor who posthumously lends his name to this odd museum. But the long history of mergers with a tenuous link to Johann Puch isn’t the draw here.

What matters is that the collection is certainly the only place in the world where an Audi Allroad with a failed suspension vies for attention with a delivery-mileage Chrysler Voyager, a green Pontiac Aztek, a high-riding Volkswagen Golf Country with a beefy brush guard, countless bicycles, and virtually every conceivable iteration of the Mercedes-Benz Geländewagen.

Every vehicle housed within the sporadically open museum – five euros buys you access, but not necessarily during the posted hours – has some tie to the firms that eventually became known as Magna Steyr.

It’s probably the weirdest collection of vehicles ever assembled under one leaky roof.

One thing the museum is not is glitzy and polished, like those the Porsche and Mercedes-Benz museums over the border in Germany. The Johann Puch Museum’s gift shop at the time of our visit had offered a few faded promotional items that were probably clogging up a supply closet at Magna Steyr’s Graz assembly plant, until being dropped off at the warehouse. The vehicles are covered in a layer of crud, most with tires so cracked that they’ll never hold air again. Suspensions have collapsed. The displays are inconsistently labeled and haphazardly arranged. Even venturing to the museum’s restroom requires a stroll down a dimly lit hallway straight out of a horror film.

For most dedicated car enthusiasts, it’s absolutely worth the visit.

View the embedded image gallery online at:
https://www.autobodynews.com/index.php/on-the-lighter-side/item/18734-on-the-lighter-side-the-ten-weirdest-cars-in-the-world-s-most-bizarre-car-collection.html#sigProId2ba8150c34
More in this category: « On the Lighter Side: Could the 1929 Studebaker ‘House Car’ Be the First Motor Home? On the Lighter Side: It's Happening! Hyundai Launches First Flying Car Division for an Automaker »
back to top