On the Lighter Side: Seven of Henry Ford's Most Impactful Inventions 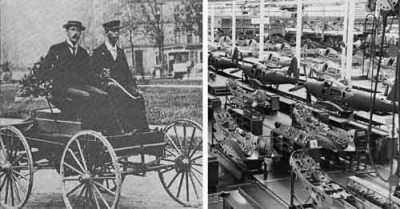 Henry Ford is one of the most prominent inventors and innovators in American history and one of the greats in the automotive industry.

He started his career as a machinist in Michigan and would eventually move on to work for Thomas Edison as an engineer.

Ford pioneered much about the modern industry through his work and has forever changed the world. While Ford was an all-around impeccable businessman, he made many notable inventions throughout the years.

After Henry Ford got married, he was hired by the Edison Illuminating Company where he quickly rose through the company's ranks. In two years Henry had become the chief engineer. This job had grueling hours as he was on call 24/7, but Ford found time to work on his own projects during downtimes. He was working to build a horseless carriage powered by a gasoline engine, or an automobile. Ford wasn't the first to think of this concept, but utilizing his engineering skill he designed a vehicle he named the Quadricycle. This vehicle was a light metal frame that rode on four bicycle wheels.

Following his invention of the Quadricycle, Ford wanted to improve on the original design, but he needed money to do so. Ford built and sold quadricycles to gain funds to work on the development of other vehicles. Over the course of about seven years, he received backing from many prominent investors of the time and formed the Detroit Automobile Company in 1899.

The Detroit Automobile Company would later become the Ford Motor Company, and the first car Ford produced was the Model A.

The Model A was revolutionary and would slowly provide people with a fast easy means of transportation.

The demand for the vehicle skyrocketed and Henry Ford needed a new efficient means of keeping up with production. While Ford didn't invent the idea of an assembly line, he was notably one of the most prominent people to implement it in his factories on a wide scale.