On the Lighter Side: Steve McQueen's "Bullitt" 1968 Mustang GT Is for Sale 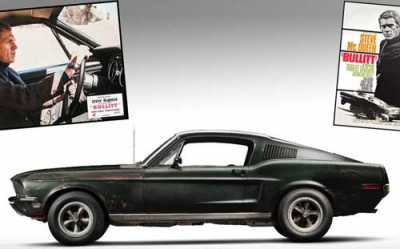 The world record auction price of $2.2 million for a Mustang will almost certainly be smashed by the Bullitt car, as will the $1 million record for a Mustang appearing in a feature film (Gone in 60 Seconds). Courtesy of Historic Vehicle Association / Insets Courtesy of Warner Bros.

After four decades, so well hidden, that most believed it had been destroyed, the hero car from the Warner Brothers cult movie Bullitt reemerged in January 2018 at the North American International Auto Show in Detroit.

One of the most iconic cars in automotive history is now scheduled to be auctioned by Mecum in January in Kissimmee, FL.

The Highland Green "Bullitt" 1968 Mustang GT was used in one of the great car chase scenes in silver screen history, driven by Steve McQueen and his look-alike stunt-double, Loren Janes.

McQueen was more than comfortable in doing his own stunts as Lt. Frank Bullitt, but risk mitigation and insurance premiums meant stuntmen had by then become necessary in the film industry, and McQueen was far too valuable a commodity to be imperiled.

The car to be auctioned in January is one of just two Mustangs used in filming Bullitt, and it was the "hero car" – the car used in close up filming and most importantly, it is the car used in THE car chase. 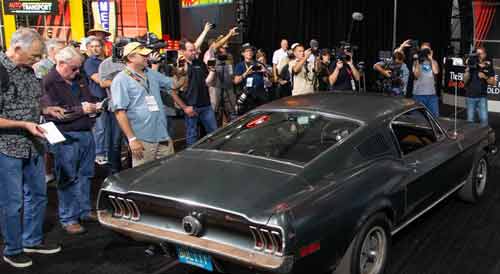 The announcement of the auction was made at Mecum's Monterey 2019 auction today, with owner, Sean Kiernan (pictured above), present alongside Mecum Auctions President Dana Mecum (pictured below).

It was an emotional unveiling for Kiernan, who inherited the car from his father. 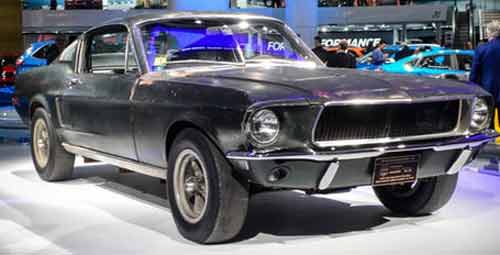 The Bullitt Mustang made its second public debut at the North American International Auto Show in Detroit in 2018 (pictured above) and most recently was on display last month at LeMay, America's Car Museum.

Between now and its date on the Mecum auction block in January, the Mustang will be exhibited at key automotive events around the United States.

What Will It Fetch?

Just what the car will fetch will be interesting to watch. The record price of $1,000,000 for a Mustang that has appeared on film is held by the 1967 Shelby Mustang GT500 (pictured directly above) that appeared in the movie Gone in 60 Seconds (2000) alongside Nicholas Cage (playing retired master car thief Memphis Raines) and Angelina Jolie in the female lead role as "Sway."

View the embedded image gallery online at:
https://www.autobodynews.com/index.php/on-the-lighter-side/item/18290-on-the-lighter-side-steve-mcqueen-s-bullitt-1968-mustang-gt-is-for-sale.html#sigProIdc547241f4b
More in this category: « On the Lighter Side: With Over 1,500 Classic Cars: One of the Greatest Vintage Car Graveyards On the Lighter Side: Starship Technologies to Launch Autonomous Food Delivery Robots Across Colleges »
back to top