On the Lighter Side: With Over 1,500 Classic Cars: One of the Greatest Vintage Car Graveyards 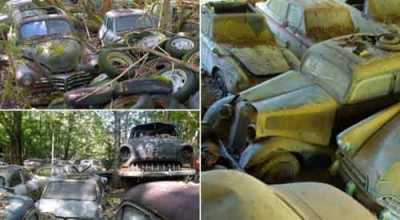 Less than ten years ago, the municipality of Kaufdorf, in the canton of Bern, Switzerland, had more classic cars than residents.

One might think that only several hundred people live in Kaufdorf, but this tiny municipality has a population (as of December 2015) of 1,061, and thanks to Walter Messerli. Until 2009, they were largely outnumbered by his classic cars. Messerli was the owner of one of the biggest vintage car graveyards in Europe. He started collecting cars for parts back in 1933, but once the usable parts were removed from these classic beauties, Messerli preserved the empty shells in his yard. He was a part-time race driver and has always been fascinated by cars, so his great love for the cars was the thing that stopped him from giving the cars away to be pressed and shredded like the others in his business did.

What started as a rather unusual hobby for Messerli in 1933, soon turned into an obsession for him, and as years passed by, his collection of vintage cars was getting bigger and bigger. For 50 years he continuously added more and more cars to his yard and eventually owned a collection of hundreds of vintage cars. Messerli retired in 1970, but passed the business onto his son who continued to add more cars to his father’s collection and eventually reached the number of around 1,500 vehicles. Many of them were nearly 80-years-old by 2009 and were of great historical significance for the automobile industry.

However, just like the cars in his yard, everything has its beginning and end. Unfortunately, for every classic car enthusiast out there, this vast metal jungle of nearly 1,500 rusting cars in Kaufdorf couldn’t last forever. Although many people considered Messerli’s collection to be a historical artifact and did everything they could to preserve it, environmental organizations claimed that the collection is an environmental hazard and that it can damage the fauna and the flora of the area. In 2008, the Swiss government decided that the car cemetery had to be removed, so the court ordered the removal.