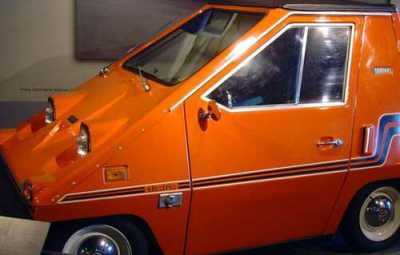 Dubbed "the car that makes the Aztek look pretty" by Autotrader, the Marcos Mantis was an obscure British sports car with a bizarrely long "snout" and abysmal sales: Only a few dozen were sold before the company went bankrupt. "No one seems to know how many Mantis models still exist; presumably, no mere mortal has the gastrointestinal fortitude to count them," Autotrader says. Nissan's second relatively recent entry on this list, the Juke never exactly went mainstream thanks to its unconventional design. Nissan called it "a fun car that allows for more assertive expression," but others were unconvinced (The Guardian called it "short-muzzled, frog-eyed and magnificently ugly"). Regardless, beauty is in the eye of the beholder. Jukes sold well, and Nissan redesigned it to make it even weirder-looking in 2014.

A legendary flop of the '50s, the Ford Edsel "was one of those ugly ducklings that never had a swan phase," according to The New York Times. Ford apparently invested some $250 million in the distinctive Edsel, but shifting consumer tastes meant buyers had little love for this flashy cruiser. One of the most maligned design features? The grille, which "drew comparisons to an Oldsmobile sucking a lemon, a toilet seat, and other cruder images," notes the Washington Post. A crossover that can haul a laughable amount of junk in its oversized trunk, the Lincoln MKT has changed little since it was unveiled in 2010. And that's ... unfortunate, unless you're into cars with disproportionate rear ends (hey, we won't judge). The Daily Drive calls it one of the ugliest SUVs of the past 20 years. "There's really no way around this: The MKT is ungainly ... The overall look is not unlike a wheelbarrow rolling backwards."

And now for something completely different. Japanese cars are more design-forward than their American counterparts, but there's a difference between pushing the envelope and setting it on fire. The Mitsuoka Orochi, a limited-edition six-figure sports car, is in the latter category. "The front end is absolutely bizarre, in the sense that it looks like the designer tried very hard to make the car look like it was smiling, or possibly eating something," notes Autotrader. "I truly believe it was modeled on an image of some sort of happy-looking animal."