On the Lighter Side: Rivian Introduces a Pull-Out Kitchen for Its R1T Electric Truck 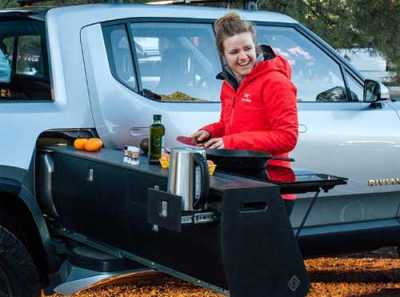 Rivian cooked up a mobile kitchen prototype that showcases ways to utilize the extra storage space in the R1T truck. Rivian

For those who love life on the go, carmaker Rivian introduced a useful new feature for their R1T electric pickup truck.

Premiering at the Overland Expo in Flagstaff, AZ, the company showed off a mobile camp kitchen prototype incorporated inside the truck.

The kitchen is designed to slide out from the truck's gear tunnel that is placed between the bed and the cab. It features two burners, a sink and storage for extra water. It also has all the utensils you may need. Even better, it is powered by the R1T’s 180kWh battery pack.

Hiding inside the gear tunnel

This isn't the only thing hiding it the truck's gear tunnel. There is also another locked storage compartment, in addition to storage space in the kitchen itself.

Other revealed add-ons include racks, vehicle-mounted tents and flashlights in the drivers' doors.

Even without the added kitchen, the R1T electric truck is an impressive vehicle. The firm claims it has a range of 400 miles.

It offers the option of gaining some of that range back as the battery charges downhill. The company also claims that it plugs into "America's fastest-growing charging network."