On the Lighter Side: World's Longest Electric Bus Can Carry 250 Passengers 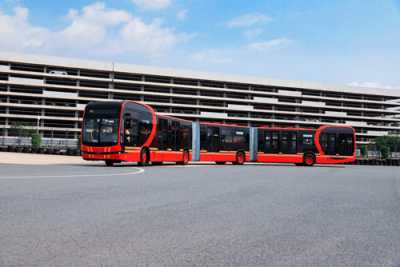 Chinese auto maker BYD Auto has been rolling out electric buses for a number of years now—launching a 40 ft. long range people carrier in 2010, supplying Schiphol Airport in Amsterdam with 35 vehicles in 2013, and revealing the world's largest battery electric vehicle in 2014.

That last title has now been bested, by BYD. Earlier this week, the firm unveiled theK12A—a 27 meter (88.5 ft.) pure electric bus capable of carrying up to 250 passengers.

The K12A was officially launched at BYD's Shenzhen headquarters on April 2, 2019. The bi-articulated battery electric bus is the first to be equipped with a distributed 4WD setup, meaning that the vehicle can be switched from two-wheel-drive to four-wheel-drive and back when the route calls for something extra.

Developed for global Bus Rapid Transport (BRT) systems, the bus incorporates proprietary batteries, electric motors and electronic controls. It can carry up to 250 people, has a top speed of 70 km/h (43.5 mph) and offers around 300 km (186 mi) per charge range, which could well represent a full day's operation before it needs a top up. The bus also comes with both DC and AC charging ports that "can be switched freely to meet customers' every need."

View the embedded image gallery online at:
https://www.autobodynews.com/index.php/on-the-lighter-side/item/17629-on-the-lighter-side-world-s-longest-electric-bus-can-carry-250-passengers.html#sigProIdc4dcc46e38
More in this category: « On the Lighter Side: A Tesla Model S Motorhome has Its Sights Set on a World-Speed Record On the Lighter Side: Mini Tesla Model S Will Get Your Kids to Love Electric Cars »
back to top