On the Lighter Side: This Vintage Euro Van Is Making a Comeback 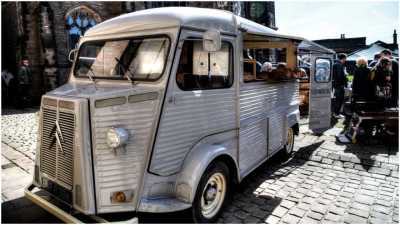 Mustangs, Camaros, Dodge Chargers, and Trans Ams are iconic cars from America in the 50s and 60s. They paint a scene of the open road: cruising down Route 66 with the top down, riding in style through the land of the free.

Across the Atlantic, the automobile formed a different stereotype. Renault, Peugeot, and Citroën may not be names known in American households, not known for speed nor pizzaz. This doesn’t belittle their iconic existence. Recently in a Sotheby’s auction in Paris, a Citroën H Van from 1950 was sold for over $49,000. Compared to many examples for sale on various websites, the Sotheby’s settled price is a high one.

Some models sell for as little as $6,000. How much you spend on the antique depends on how much work you’re willing to put into. Some come in complete disarray, not having been driven for decades, or don’t include tires. Some come kitted out and ready to roll straight into a kitsch new business.

How have these cars merited such a hefty price tag? The Citroën H Van was known under several appellations including the HY, HX, HP, HW, 1660, and, when used by the police, a “salad basket.” Though unsure of whether or not the latter is a positive or negative nickname, it is certain that the H Van was multitalented.

Thanks to its design, the van could be adapted to a plethora of uses. First produced in 1947, the van was inspired by the German Junker, an aircraft which made its debut in the first world war. The Citroën was made with a single frame that had a low-hanging, flat floor which allowed for a full 6 feet of headroom. This enormous interior space and sturdy construction can even manage transporting a horse among other loads.

Its structurally sound design doesn’t stop there: the metal ribbing of the van’s walls add strength to the vehicle without too much weight, resulting in lower production costs. One reason these vehicles are so rare in the U.S. is because of chickens.