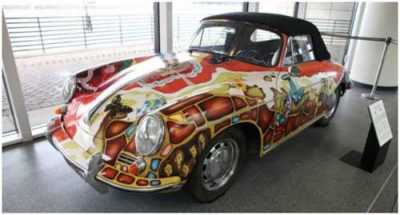 For some, the 1960s were all about rebellion — rebellion against the conservative 1950s, against the war in Vietnam, and pretty much everything run by “the Establishment.” Young people made their voices heard and refused to accept outdated customs and rules.

Music, especially, reflected the times with Motown, protest songs, and psychedelic music and images. The ’60s produced some of the most talented and influential musicians of modern times.

The newfound wealth of some of these young musicians found its way to luxury automobiles. Eric Clapton had a custom made Ferrari, Robert Plant of Led Zeppelin fame had a 1965 Aston Martin, and Jimi Hendrix drove a 1968 Corvette.

There are three vehicles in particular from the ’60s that stand out the most because of their custom paint jobs. In 1968 Janis Joplin bought a Porsche 356C and had one of her stage hands paint it in a psychedelic theme including butterflies, birds, mushrooms, and landscapes that made it one of a kind.

She drove it around San Francisco, and it was easy to spot where she was. After Janis’ death in 1970, her sister and brother shared ownership of the car. The unique paint job began to flake off, and it was repainted in gray.

Some time later, the family hired artists to restore the unusual paint job, and in 1995 the car was loaned to the Rock and Roll Hall of Fame in Cleveland, Ohio.

It was put up for auction in 2015, and, according to money.cnn.com, sold for $1.15 million at Sotheby’s in New York City to a Michigan man. The siblings planned to donate the proceeds to charities in Janis’s name.

In 1962, novelist Ken Kesey, author of "One Flew Over the Cuckoo’s Nest," bought a 1939 International Harvester yellow school bus. He had decided to drive to New York from California in 1964.

As more and more friends decided to join him, he realized he would need a large vehicle to carry his “Merry Band of Pranksters.”

According to goingfurthur.com the bus was painted in a psychedelic theme by Roy Sebern who painted the word “Furthur” on the front, and the bus was known by that name from then on. (Yes, it’s Furthur, not Further.)

The trip was an LSD fueled party, stopping in Phoenix to display a banner that read, “A VOTE FOR BARRY IS A VOTE FOR FUN!” as they drove past conservative Barry Goldwater’s presidential campaign headquarters.

In Houston, they stopped to visit the zoo, and they generally took advantage of being able to see the country as they drove east. The tour was filmed with the intention of making a movie, but the final edit by Kesey was never released.

Author Tom Wolfe used the films to write a book, The Electric Kool-Aid Acid Test, about the journey. The last trip the bus made was to the Woodstock Music Festival in New York in 1969.

After Woodstock, the bus sat on Kesey’s property in Oregon. In 1990, Kesey outfitted a new Furthur bus, a 1947 International, to coincide with publication of The Furthur Inquiry, a photographic memoir of their escapades.

He also retraced the route, calling it the “Grandfurthur Tour,” to bring his new bus to Cleveland in 1997 for the “I Want to Take You Higher: The Psychedelic Era 1965-69” exhibit at the Rock & Roll Hall of Fame and Museum.

Kesey died in 2001 due to complications arising from surgery to remove a tumor. Restoration of the original bus was funded through a kickstarter campaign and in 2014 a fresh team of Merry Pranksters made the Furthur 50th Anniversary Trip.

It’s fairly safe to say that John Lennon had the most luxurious of the cars with psychedelic paint. In 1964, Lennon bought a Rolls Royce Phantom V. It was originally all black except for the radiator and it had every possible extra that Rolls Royce offered.

There was refrigerated storage in the trunk for keeping beverages cold to use at the cocktail cabinet while watching a portable television. Lennon’s Phantom was one of the few vehicles at that time to have tinted windows which, according to Rolling Stone, made the ride home from a party that went past dawn a bit easier.

About six months after he took possession of the car, Lennon wanted alterations done. The back seat was equipped to fold out like a bed, an imaginative music system was added that played records and reel to reel tapes while the car was in motion, and a horn was installed that played the Marlene Dietrich song Lili Marlene.

By 1966, the Phantom had clocked up close to 20,000 miles and desperately needed a paint job. Lennon contacted J.P. Fallon Ltd. and told them what he wanted.

The body was painted yellow, and designs were painted on by Steve Weaver. Floral panels and elegant swirls covered the car in many colors, and Lennon’s astrological sign, Libra, was painted on the top.

The car naturally drew criticism from the older generation, much to his glee. The colorful Phantom was replaced by a pure white Phantom V as Lennon matured into the White Album days.

The psychedelic Rolls was shipped to New York for Lennon’s use there, but he mostly loaned it out to his friends or kept it in storage.

In 1977, it was donated to the Cooper-Hewitt Museum at the Smithsonian Institute, and, five years after Lennon’s death in 1980, the museum auctioned it off through Sotheby’s.

It was purchased by Canadian businessman Jim Pattison for $2,299,000 and is now at the Royal BC Museum in Canada, where it is occasionally displayed.

View the embedded image gallery online at:
https://www.autobodynews.com/index.php/on-the-lighter-side/item/17108-on-the-lighter-side-psychedelic-celebrity-cars-of-the-1960s.html?showall=1&start=0#sigProIdb23d697e66
More in this category: « On the Lighter Side: Ralph Lauren Owns the Most Expensive Car in the World On the Lighter Side: VIDEO: 1 Year After Launch, Checking in on SpaceX's Starman »
back to top