On the Lighter Side: Ralph Lauren Owns the Most Expensive Car in the World 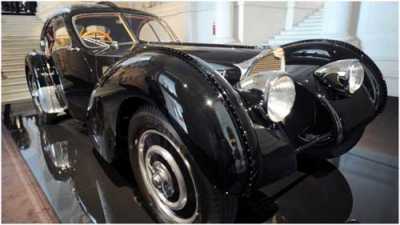 Ralph Lauren, famous for his love for old cars, has managed to amass more than 60 rare car models. He owns, among others, a 1958 Ferrari Testarossa and a 1929 Bentley Blower.

All his cars are securely stored in a hidden park building in Bedford Hills, New York. Among them is a rare gem which he acquired in 1988.

It is a Bugatti 57SC Atlantic, and it is worth a ridiculous $40 million. The Atlantic that is in Lauren’s ownership is officially the most expensive car in the world.

The puzzling question is how can a car be worth a fortune? As Jalopnik reports: “It’s a beautiful car, but not $40 million beautiful. Then again in that rarefied air, you’re not paying for value, but for exclusivity.”

While it can be seen as “only” a car, the Atlantic is much more than that. It is a historical monument of pre-War Europe on wheels.

The Bugatti Type 57, that includes the Atlantic, was a creation of Jean Bugatti, the son of the founder Ettore.

The cars were built between 1934 and 1940 with only 710 produced. The 57 SC type, the one that Lauren owns, is one of the most iconic models ever produced.

The “S” in the name stands for “surbaissé” which means “lowered” and C “compresseur”, a supercharger that was made as an answer to customer desire for higher power.

Now there are only two 57SC models left in the world, with originally only three being produced to our knowledge. One was destroyed in a train accident in 1950.

The other one is now in the Mullin Automotive Museum in Los Angeles — was sold to the museum for $38 million. The only free-roaming model is in the hands of Ralph Lauren.

When Jean Bugatti produced it not many of his contemporaries understood the design. He debuted his Aérolithe concept in Paris in 1935. Aérolithe was the first model in the Type 57 collection.

The cars were made of lightweight, but very sturdy magnesium alloy called electron instead of the aluminum sheets that usually coated Bugatti models.

View the embedded image gallery online at:
https://www.autobodynews.com/index.php/on-the-lighter-side/item/17069-on-the-lighter-side-ralph-lauren-owns-the-most-expensive-car-in-the-world.html#sigProIdd8079756a9
More in this category: « On the Lighter Side: VIDEO: GM Uses 334,544 Lego Bricks to Build a Full-Size Chevrolet Silverado On the Lighter Side: Psychedelic Celebrity Cars of the 1960s »
back to top