On the Lighter Side: 2019 Lincoln Continental Brings Back the Suicide Doors 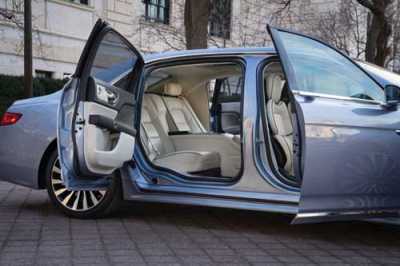 Lincoln is officially bringing back the suicide doors back with the introduction of the Lincoln Continental 80th Anniversary Coach Door Edition.

Inspired by the Continental from the 1960s, the Coach Door edition is a limited-edition Continental, which amps up the luxury and style of the big sedan.

“The center-opening doors became synonymous with the Lincoln Continental, even though they were only featured primarily in the ’60s,” says David Woodhouse, design director, The Lincoln Motor Company. “But they struck such a chord that they’re still remembered so fondly today.”

The Lincoln Continental 80th Anniversary Coach Door Edition features unique rear hinged doors that open 90 degrees to make it easier for passengers to get in and out. In addition to the unique rear doors, Lincoln has also stretched the wheelbase by six inches to provide more rear seat room.

Inside the rear passengers will be treated to even more luxury features thanks to the Lincoln Black Label interior. Plus a new pass-through console has been added to the rear that offers a stowable tray table with tablet holder and wireless charging pad.

The Continental Coach Door edition is powered by a 3.0-liter twin-turbocharged V6 engine with 400 horsepower and 400 lb.-ft. of torque.

Lincoln only plans to produce 80 units of the Continental Coach Door Edition sedans for the 2019 model year, which will arrive by next summer. The good news is that it will also be offered for 2020 model year as well.

We thank The Torque Report for reprint permission.