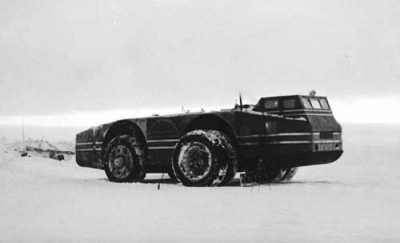 It's no wonder then, that as the enormous Snow Cruiser left its Chicago construction yard on 24th October 1939, it was destined to enjoy a memorable journey towards the awaiting ship bound for Antarctica shores. From Chicago to Boston, also taking in New York on route, the world came to a grinding halt as the red leviathan passed by. Streets and roads were lined with thousands of inquisitive people dominating the route.

Chances are, before it had even navigated one single street, it would have both astonished and held up other drivers on the road. After all, it’s not very often that a vehicle is so large that it requires both lanes. Anyone else on the same road as the Snow Cruiser had no option but to pull off the tarmac and simply let this bizarre automobile through.

Most roads were closed before the Snow Cruiser arrived and, if you caught it up afterwards, you’d likely only be doing 30mph at best. At other points, the Snow Cruiser moved at a snail’s pace and the inevitable delays as the giant navigated tricky obstacles were lengthy.

A week after leaving Chicago, the Snow Cruiser arrived in Ohio and encountered numerous problems within the state. One time-consuming section was a bridge exactly 20-feet wide, leaving a total clearance of only 4 inches. It took three hours and four men, each carefully watching a corner from on top of the Snow Cruiser, to help guide the vehicle safely across.

They didn't have the same success on a small bridge on the Lincoln Highway, when the steering system broke near the town of Gomer and resulted in the Snow Cruiser driving off the bridge into a stream. Hydraulic jacks incorporated into the bodywork partially lifted the Snow Cruiser off the ground, allowing timbers to be placed under the wheels and serve as a ramp back onto the road. However, thanks to the sheer bulk involved, it wasn’t an easy task and the Snow Cruiser was stuck there for three days meantime.