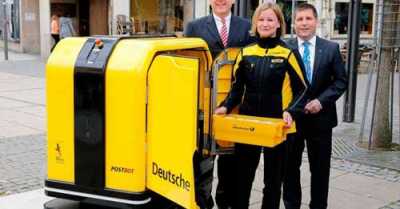 Postal services are going through an evolutionary transformation toward incorporating more automation into their delivery service.

In the '60s, The Beatles gave the postman a central role by singing "Please, Mr. Postman." Fifty years later, the human Mr. Postman is being replaced by a robot that is part of an automated sorting and delivery system for letters and parcels. The human postman, in this era of automated delivery, takes other supervising roles instead.

In Norway, Posten-Norge, the Scandinavian country’s postal service, has hired a robot to deliver letters and parcels. For this, Posten-Norge teamed up with Buddy Mobility, the company supplying the robot.

Buddy Mobility is a Norwegian startup company made up by an international group of designers, engineers, researchers and developers who are based in Oslo and the San Francisco Bay Area.

The new Posten-Norge’s delivery robot looks like a box with wheels.

Buddy Mobility is an emerging concept, an autonomous vehicle service that brings a new level of efficiency to urban mobility. Buddy Mobility partners with delivery and passenger service providers aiming to extend the services that make the movement more flexible, reliable, and sustainable according to the new smart cities vision.

The Norwegian postal service is not the only one adding bots to the postal service of the 21st century. In Germany, postal service Deutsche Post, which is part of DHL, has a similar electric delivery robot called PostBot.

PostBot has been designed to accompany mail deliverers on their routes facilitating their job. PostBot carries the post in the German town of Bad Hersfeld.

PostBot carries up to six post trays. This relieves carriers of their heavy loads. PostBot frees up the deliverers' hands making it easier for them to distribute letters and parcels.

More in this category: « The Death Car: Urban Legends Surrounding 'Haunted' Cars Difficult to Explain On the Lighter Side: ‘Crime Cars’ Featured at Alcatraz East Museum »
back to top