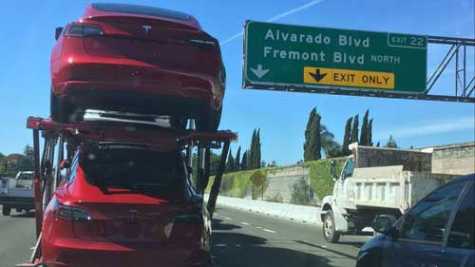 Elon Musk said an “extreme shortage” of car carrier trailers is partly to blame for Tesla’s delivery woes. And in typical Musk fashion, the answer is for Tesla to build its own trailers.

That has trucking industry executives and analysts scratching their heads.

“There’s no shortage that I know of,” said Guy Young. As general manager of the Auto Haulers Assn. of America, he would know. “There’s a general shortage of drivers, but we’ve got a lot of members with drivers and car carriers who could supply what they need.”

Antti Lindstrom, a trucking analyst for IHS Markit, is flummoxed too.

“I have never heard of a situation like that,” he said. “In my experience there is always some available capacity that can be harvested” — especially, he said, for a well-known company with a $50 billion market value. “It’s confusing. It doesn’t sound real to me.”

Many Tesla buyers complain they’ve paid full price for one of the company’s new Model 3 vehicles but haven’t received them or had planned deliveries canceled. The auto haulers’ Young said the problem more likely lies with Tesla’s own logistics operation.

“It’s like anything else,” he said. “If you don’t start planning ahead of time, building relationships, it can get a little difficult.”

Tesla declined to discuss trailer shortages, or details of any plans to build its own, with The Times.

“If they’re talking about building [trailers] from the ground up, that would be a surprise to me,” he said.

First, the National Highway Traffic Safety Administration has a long checklist of regulatory information that must be submitted and processed for a new commercial trailer to be used on public highways. Also, materials, tooling, an assembly line and trained employees would be needed to build them.

It’s possible, though, to build a system inside a regular enclosed semi-trailer known as a “dry van” to hold about eight cars without necessitating government approval, Maly said. It’s called an “upfit” and it’s used by several automakers, he said.