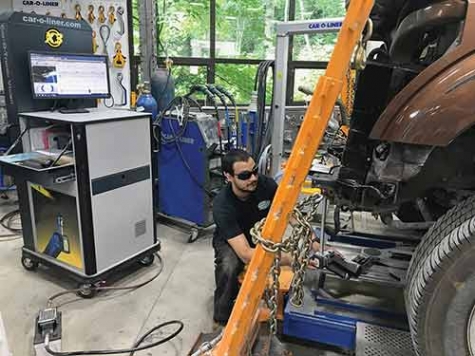 Andrew Smith at Opeka Auto Repair uses the Car-O-Tronic Vision to measure a Ford F-250 with the shop’s Car-O-Liner frame machine.
Share This:

When employees answer the phone at Opeka Auto Repair, they tell customers, “We can help you.” Dale Opeka, owner of the business’s three body shops in Pennsylvania, said that has always been his mantra.

“We’re here to help people,” he said. “We want to be able to take any problems away from the customer and make it as simple as possible.”

Although the team works hard to ensure they restore all vehicles to pre-accident condition, Opeka said that doing a quality repair today is table stakes.

“We’ve always followed procedures the way we are supposed to---you have to in today’s world,” said Opeka. “Our differentiator is we make it easy for people.”

This includes negotiating with the insurance company, setting up a rental car and handling all of the issues associated with the repair.

Opeka’s parents, John and Lillian, started Opeka Auto out of a two-car garage at their home in McMurray, PA, in 1951. John repaired vehicles there for nearly a decade, and assisted many loyal, longtime customers. Eventually, he moved the business into the facility where they now operate, three miles from where they began.

That was 1960, the same year Dale was born. Three years later, the business was incorporated.

Growing up, Dale spent most of his free time and weekends in the garage, learning about the business. He assisted his father at the shop throughout grade school and high school and earned a mechanical engineering degree from the University of Pittsburgh in 1982.

A few years later, in 1986, Opeka took over the family business and changed the name to Opeka Auto Repair Company Inc. About five years ago, he purchased a 5,000-square foot building in Canonsburg, PA, which eventually became a second location. Then, a year and a half ago, Opeka opened a third facility closer to Pittsburgh with a collision repair and mechanical shop.

All three locations are in close proximity to one another.

“Our shops are all within about 10 miles from end-to-end, so our name and reputation are pretty well known,” he said.

In addition to collision repair, the business also offers mechanical repairs at its McMurray and Upper St. Clair locations. Opeka first learned about Car-O-Liner when researching manufacturer approvals, and took a closer look at the company and its offering while attending industry tradeshows. When the body shop began getting involved in certification programs, Opeka realized the need to purchase frame equipment with specific features.

After researching the brands on the market, Opeka felt the Car-O-Liner® frame machine would meet all of his shops’ needs, and was well-priced.

“Once we started using it, we found it is a fantastic system,” said Opeka. “It’s fast, accurate and my guys love to use it.”

Opeka has been impressed with the training and support provided by Great Lakes Car-O-Liner.

“They have been fabulous, and the service is wonderful,” he said.

The body shop has since purchased Car-O-Liner® products for all of its locations. Even though Opeka said there was a perfectly good frame machine at the newest location, the first thing he did was sell the existing machine and replace it with another Car-O-Liner® Benchrack™ and Car-O-Tronic® Vision2™ X3 measuring system.

Since using Car-O-Liner® products at the facilities, Opeka said it has streamlined the repair process.

“It goes back to our mantra of helping people,” he said. “We want cars to get out and back to the customers as quickly as possible.” Since using Car-O-Liner® products at the facilities, Opeka said they have found it has streamlined the repair process.

He has also been impressed with the equipment’s accuracy and the lack of mistakes. With their prior equipment, Opeka said there were many times employees would have to put the car back on the frame machine to make a change later in the process because it wasn’t measured correctly the first time.

Opeka said his shops use the equipment all the time, even during the pandemic. Although the claims count was down during the stay-at-home restrictions, Opeka said severity was substantially higher.

“The machine seemed to be getting used more now than it was before,” he said. “People were getting their cars repaired because they had to, not because they were choosing to.”

“They are just amazing, the way they will duplicate factory welds almost automatically,” said Opeka.

Opeka said the Car-O-Liner® equipment meets the manufacturers’ certifications, and the measuring system, Car-O-Tronic® Vision2™, is very accurate and simple to use.

A burning issue that Opeka said really bothers him is how the outside world often portrays the industry.

“I think if shops would make more of an investment in themselves through high-quality equipment, training and professionalism, like what is provided by companies like Car-O-Liner, maybe Hollywood would stop acting like we are all drug dealers and chop shops.”