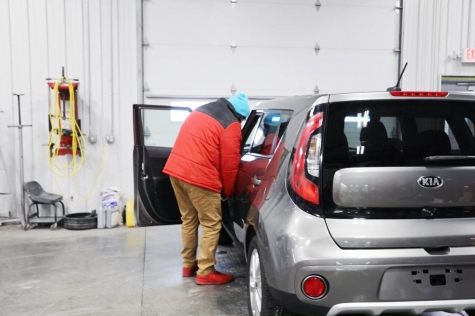 Corey Dorsey of Pittsburgh, PA, gets a first look at his new car.
Share This:

Diehl Collision in Washington, PA, partnered with GEICO to donate a refurbished car to a local veteran Feb. 11.

Corey Dorsey, of Pittsburgh, PA, retired from the U.S. Army after serving from 2003 to 2010, which included a deployment to Iraq, according to a news release from Diehl Collision.

On Feb. 11, he received a 2018 Kia Soul, after being selected the recipient by the Pittsburgh VA Healthcare System, the release states.

“We are so excited to gift this vehicle to Mr. Dorsey,” said Kody Niedzwiecki, Diehl Collision’s general manager, in a news release.

Diehl Collision, at 1280 Banetown Road, used to be Nadalin Auto Body, which participated in the National Auto Body Council Recycled Rides program. The program allows for businesses in the auto repair industry to repair and donate vehicles to families in need.

“We take a lot of pride in our community and are happy to step up, especially in trying times like these,” he said in the release. “When we move into a new community, we enjoy being a part of that community. In this case, we want to continue the great legacy that Nadalin Auto Body started.”

Since the National Auto Body Council Recycled Rides program started in 2007, more than 2,500 cars have been donated, according to the release.

We thank the Observer-Reporter for reprint permission.