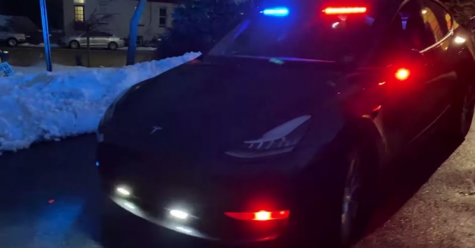 As Tesla continues its quest for automotive dominance, their vehicles are becoming more and more common not only within luxury markets but also as police cruisers.

The first Model Y has officially debuted as a police car in New York. Specifically, the car was commissioned by the Hastings on Hudson Police Department located in Westchester County.

However, this electric police-cruiser won't be chasing down speeders in traffic; rather it will be sleuthing down back alleys as part of the department's detective division.

Even though it will just be used by detectives, the car is still fit with lights, sirens and police radios, the typical accoutrement of a police car of the like.

As for what type of Model Y the police department decided to use, it's a long-range silver metallic Model Y that sits on the 19-in. Gemini wheels.

Upon learning the Model Y has been put to use as a police cruiser, one might start to wonder why...