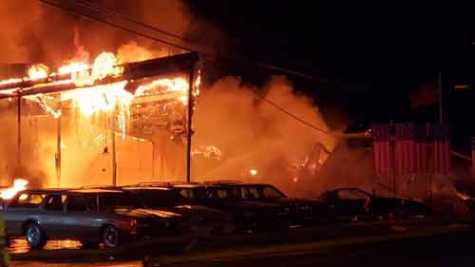 After spending $200,000 to clean up all debris after the fire, the dealership was left "destitute." According to the source, the dealership has yet to be compensated anything by Calling Grace, and they were also forced to cut eight jobs because of the fire.

About 14 vendors and subcontractors with connection to the production company have been investigating the fire.

Court paperwork shows the dealership is also suing because of a breach of contract, and the fire "resulted in insured, uninsured and underinsured damages."

Even more, the agreement between both parties specified if Calling Grace had the dealership dislodged for more time than contracted, it would pay $1,750 per day, and if cars were not returned to the location, it would pay $1,000, charges that are continuously collecting to this day.

Having wrapped up the six-part HBO series June 14, the production for "I Know This Much To Be True" brought 260 full-time jobs, along with boosting the local economy by more than $15 million.

Series production started in October 2018 in the Hudson Valley, and plans included 28 days, with five days set aside for filming at 613 Automotive Group dealership, nestled on Main Street in Ellenville.

Sadly, the massive blaze burnt those plans, causing the dealership to relocate to another spot in town. The original location is still vacant, and both owners hope to rebuild.

What started out as excitement for the HBO production to use their dealership as a hot spot for the show turned into devastation once the large fire destroyed everything at the site.