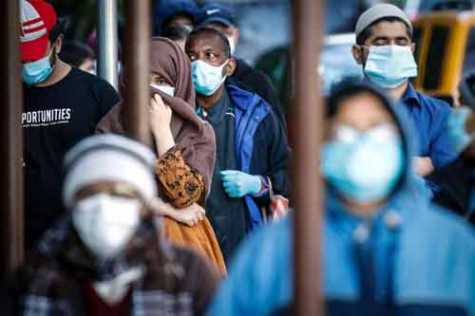 People wearing masks wait in line for food donations May 13 in the Brooklyn borough of New York City, during the coronavirus pandemic. John Minchillo/AP photo

New York Gov. Andrew Cuomo announced May 28 he would sign an executive order that gives private businesses the right to deny entrance to anyone who does not wear a face mask.

The governor said the order is a critical part of the reopening strategy for New York as it emerges from the COVID-19 emergency that has produced more than 366,000 confirmed cases statewide.

To that effort, Cuomo also announced the state would donate a million masks to residents in some of the New York City neighborhoods hardest hit by the coronavirus.

As every other region in the state except for New York City has entered phase one of the reopening plan, the governor said the focus now will be getting the city---which with more than 201,000 confirmed cases has had more than France, Germany or India---to begin reopening.

Cuomo has said he has worked hard to communicate why it’s important for people to wear masks but his daughters told him he’s not reaching everyone. So, at the Brooklyn briefing, the governor invited a couple of guests, actress Rosie Perez and comedian Chris Rock, to aid in getting the message across in their native borough.

“For those who are not adhering to the guidelines, just know that you're not just disrespecting yourself, you're disrespecting your loved ones, your communities, your neighbors, everyone,” said Perez, best known for her roles in “Do the Right Thing” and “White Men Can’t Jump.” “So, please spread love the Brooklyn way, get tested, wear a mask and let's help fight this virus.”

Not in attendance May 28 was New York City Mayor Bill de Blasio, who does not enjoy the best of relationships with Cuomo.

When asked about the mayor’s absence and getting on the same page with him, Cuomo said the two talk regularly. However, the governor also reaffirmed who will be calling the shots on the city’s reopening.

“There's state guidelines period and that's it,” he said. “So there's only one page, so you can't be on a different page when you only have one page.”

New York State reported 163 new confirmed cases of the virus, which Cuomo said was the lowest it has been during the emergency. The state reported 74 deaths for May 27 from COVID-19, marking the fourth straight day with fewer than 100 deaths and the third consecutive day where the death toll fell under 75.

We thank The Center Square for reprint permission