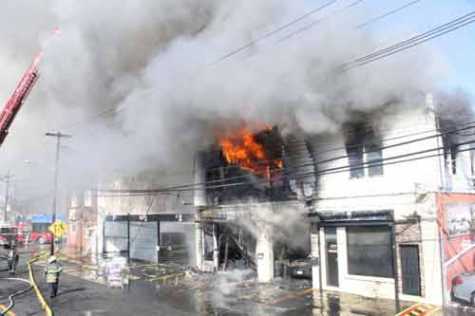 The fire broke out in an auto body shop in the Market Street building off Route 80 around 9:30 a.m., city Police Director Jerry Speziale said.
Flames quickly consumed the first floor, responders said.
The fire went to four alarms within 40 minutes, then five alarms shortly after 11 a.m.
"We had a firefighter who fell through the roof but was able to self-evacuate and appears to be OK," Speziale said.
Firefighters from Haledon, Passaic, Clifton and Little Falls were among those providing mutual aid.
The blaze was considered under control within two hours of igniting, the director said.
No serious injuries were reported, he said.
We thank the Daily Voice for reprint permission.
Read 2910 times
back to top