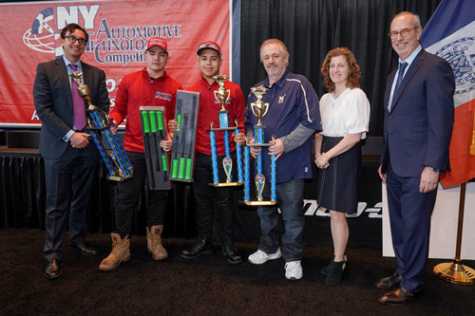 Peter Moger and Luis Pinto-Samayoa, seniors at Rockland BOCES, coached by Frank Pipolo, took home the gold against 11 other teams from throughout the state, diagnosing and fixing pre-programmed bugs in a Lexus operating system and engine in the shortest time.

The competition was held Feb. 11 at the Center for Automotive Education and Training in Whitestone, NY.

The Rockland team advanced to the state finals by placing first in their division in the regional round in January.

In April, they will represent New York State against some 29 other teams from throughout North America.

Each student was awarded $2,000 in scholarships by the Greater New York Automobile Dealers Association, which sponsored the competition, and scholarship offers from technical training schools ranging from $7,000 to $10,000.

They were also awarded a set of tools.

Previous Page Next Page »
Read 427 times
back to top