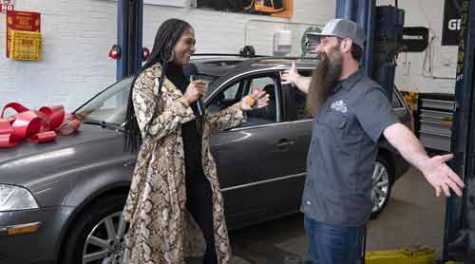 Chimaine Brandford reacts after receiving the keys to her refurbished 2005 Volkswagen Passat from Charles Sanville, the auto repair specialist who has the YouTube channel “The Humble Mechanic,” on Thursday at Second Chances Garage in Frederick. CREDIT: Bill Green Bill Green

Second Chances Garage, which sits on Market Street at the north end of downtown Frederick, looks like an ordinary auto shop on the outside. But it’s far from it. The shop sells its cars for $500 — plus $280 for titling — to those who need them the most but cannot afford them.

Second Chances turns 10 this year. To celebrate, the Second Chances mechanics and their apprentices from Gov. Thomas Johnson High School worked with Charles Sanville of the YouTube channel “The Humble Mechanic” to refurbish a car that Sanville, who has 375,000 subscribers to his channel, donated himself.

Cars are usually donated by members of the community and then fixed up by Second Chances mechanics.

Depending on the condition of the car and the work it needs, it will either be sold through the Low-Cost Vehicle Program, or put out on the lot for between $1,000 and $5,000.

It’s not exactly big bucks. But it helps the 501(c)(3) nonprofit organization offset the cost of selling refurbished cars at a reduced price.

To qualify for the Low-Cost Vehicle Program, the clients must go through a partner agency such as the Frederick Rescue Mission, Heartly House or the Housing Authority.

The car, which Sanville had towed up from his home in North Carolina, is a 2005 Volkswagen Passat that he and his family no longer need. It holds a lot of memories for him, however.

“Not everybody loves their car, but I get really attached,” Sanville said. “We bought this car in ’07, so we’ve had it forever.

It’s the car my daughter came home from the hospital in, we brought the dog home in, and all that, so it’s cool.”

He had been planning to fix it up for a while, and maybe making some YouTube videos with it.

But instead he decided to do something better, once he heard about Second Chances through his partnership with Gearwrench, an automotive tool company.

Previous Page Next Page »
Read 974 times
back to top