API Autobody Products in PA, Being Considered A Total Loss After Catching Fire 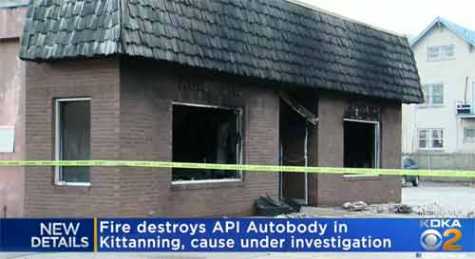 Huge clouds of smoke could be seen coming from API Autobody Products on Wednesday along South Water Street.

“You could feel the heat,” said Evan Shirley, a witness to the fire.

API Autobody Products is a total loss after the fire. The business is a paint, body and equipment distributor.

Crews were on scene for hours after the call came in around 9:30 p.m.

According to firefighters, the freezing temperatures didn’t create any problems but the heat of the fire did.

“We broke through the front door, the guys ran into a lot of heat and real bad conditions, so we backed out, went into defensive mode,” said Kittanning Hose #1 Chief Gene Stephens.

“We can replace the building, but we can’t replace nobody, so we went to defensive mode right away.”

No one was inside the building when the fire started and fire crews are investigating the cause.

Reporter: “Do you think it’s suspicious?”

Shirley: “I think so, but we won’t know till they find out.”

Officials tell KDKA they will be checking out the surveillance cameras on the business, as well as other buildings in the area.

Stay with KDKA for more on this developing story.

We thank KDKA for reprint permission.