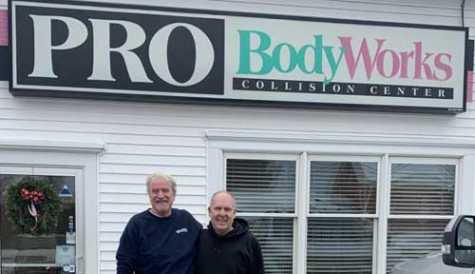 A longtime Augusta, ME, collision center manager who summers on a boat in Boothbay Harbor has bought Pro Body Works in Wiscasset, ME, from the Westport Island man who had it its first 37 years.

“He will do great,” Bruce Benner, 60, said of new owner Todd Farrin.

Farrin, 56, a lifelong Augusta resident, became manager last summer after the two friends talked about Farrin buying the business and agreed it would be good to have him work there first. “And it worked out great. It was a good fit for both of us,” Farrin said.

The sale was final Jan. 2, he said. In separate phone interviews on Monday. Jan. 13, neither man disclosed the price. Farrin said he bought the business and he and wife of 30 years Kathy, a reading intervention specialist at Maranacook Community Middle school in Readfield, expect to own the property in June.

The Farrins summer on their 36-foot express cruiser power boat High Maintenance, docked at Boothbay Harbor’s Tugboat Inn. “We are absolutely in love with the midcoast,” he explained about why he looked toward Wiscasset in buying a business after a career in collision repair in his hometown. He worked in the service department at Blouin’s from 1986 until 1994, when he became the collision center manager. He said he kept the job when Darling's bought Blouin’s in 2007 and he stayed until last July.

What’s next for Benner? “You’ll just have to stay tuned for the next adventure,” the 1977 Lincoln Academy graduate said. It won’t be in auto body, he said. Benner owns Lily Brook Apartments in Damariscotta and six rental units at 41 Water St. in Wiscasset.

“A big thank you” to all his Pro Body Works customers and staff, Benner said.

View the embedded image gallery online at:
https://www.autobodynews.com/index.php/northeastern/item/19163-bruce-benner-sells-wiscasset-s-pro-body-works-to-todd-farrin.html#sigProId3d556d0f8c
back to top