Written by Will Vitika, WTOP 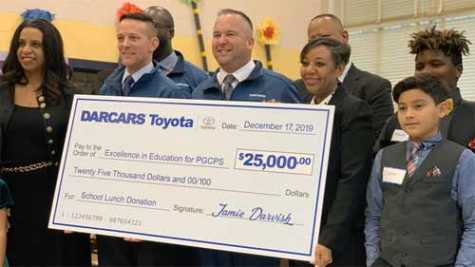 Prince George’s County, MD, public schools’ students are getting quite a gift this holiday season.

DARCARS Toyota announced that it’s paying off the school lunch debt for every student in the PGCPS system.

“It became apparent we had an issue with school lunch debt last winter during the [government shutdown],” she said. “And we’re grateful that many of our community partners came together and helped to make sure that parents did not have to worry about feeding their children during that difficult time.”

Goldson said they were able to provide meals to 10,000 students. And that DARCARS Automotive Group reached out recently to do something extra special during the holiday season: wipe out student lunch debt across the entire district.

“I’m glad we could be here to do our part in the community,” Darvish said. “Prince George’s County is extremely important to me, and my family, and our whole team at DARCARS.”

“The community supports us immensely and we’re glad to be able to do something to give back and support the community,” Darvish added.

“I really look and I see it’s not easy to be a kid today,” he continued. “The last thing in the world that a child needs to worry about is eating. And being hungry makes accomplishing tasks of overcoming those challenges and burdens in society that much harder. So, I’m honored and I’m glad that we could step up and do this.”

School lunch debt is a problem across the U.S. that can have a negative impact on students and their well-being.

More than 75% of school districts reported having unpaid student meal debt at the end of the 2016-2017 school year, according to a 2018 report by the School Nutrition Association, which surveyed 1,550 districts nationwide.

We thank WTOP for reprint permission.