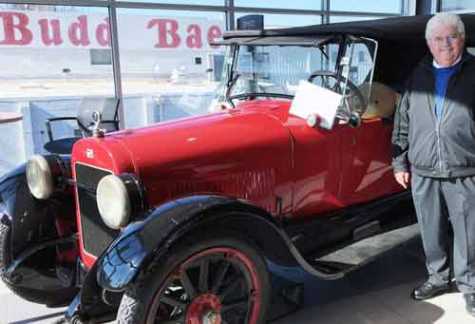 The cost of renovating his complex was a lot to bear for Mark Baer.

He declined to provide a figure, perhaps because he was still calculating it.

“Let’s say it’s a lot,” the owner of Budd Baer Auto said, during a tour of the sprawling facilities that straddle Murtland Avenue on Washington, PA’s, northern border.

Investment of time on this project was formidable as well – two years from the start of planning to end of construction. But the renovation was necessary and much more than cosmetic.

“Manufacturers (of cars) have minimum requirements we have to fulfill,” Baer said. “We ran out of space. We got to a point where we were so crowded, we were unable to service customers the way we needed. We doubled our service capacity by doing this.”

And now it’s time to show off his larger, spiffier, LED-illuminated dealership. Baer, son of the original owner, unveiled his upgraded operation on Sunday, Nov. 17 during a grand opening/open house.

Baer, appropriately, is a driven entrepreneur. He turned 70 two weeks ago, yet he displays the energy of a 7-year-old as he circulates through those buildings: Subaru, Buick/GM, Mazda and the collision center. The renovations, and they’re not small scale, excite him. And the work did not curtail business, which he said has increased 15% to 20% this year.

Budd Baer Auto has about 100,000 square feet of operating space on a 14-acre site brimming with activity. “About 1,000 cars come in and go out each day,” the owner said. “We’re just getting into collision season, and October was our best volume month ever at the collision center.”

One distinctive item endures in the showroom there. It’s a red, 1923 Buick seven-passenger touring car known as Josephine, named after the Budd Baer family dog, who rode the running board.

The owner is especially proud of his company’s environmental initiatives, which he said includes 100% usage of LED lighting. “We do everything we can to be as green as we can be.”

The car culture gripped an adolescent Baer in the early 1960s.

View the embedded image gallery online at:
https://www.autobodynews.com/index.php/northeastern/item/18870-pa-dealership-shows-off-renovations-at-open-house.html#sigProId48fbf3d334
back to top