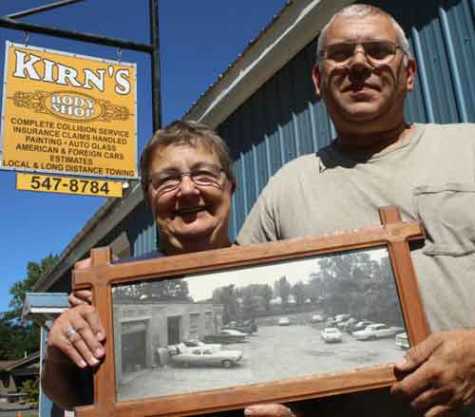 Don and Rosie Hoag this afternoon in front of Kirn’s Body Shop on Route 28 south of the Cooperstown, NY, village line. They hold a photo of the original Kirn’s, which opened in 1966 where the batting cages are today next to the Doubleday Field parking lot. Jim Kevlin, ALLOTSEGO.com

Interviewed with his wife Rosemary, the founder’s daughter, by his side, Hoag gave three reasons:

“The changing industry and what it takes to fix a car.”

“As you know, in this community, the help picture is really tight.”

Those two reasons led to a third: He realized he needed to reinvent the business, and at 60½ he and Rosie concluded it’s time to let go.

That decision made sense, they said, particularly since he and Rosie lost their son, Justin, age 32, of Duchenne Muscular Dystrophy on Sept. 27, 2016. There’s no one to carry on the business.

“I got to meet so many people in the community,” Hoag said. “It’s not like I’m saying I’m glad it’s over.”

For now, Eagle Towing of Cobleskill, NY, which has an installation on Route 205, West Oneonta, will be handling Triple-A requests, he said.

Also, the business is for sale, and Hoag’s been receiving calls from interested parties.

The founding father, Ed Kirn, a farmer in the Town of Middlefield, NY, in his early years, began to learn the auto-body trade in the 1950s, working first for Al Welch at Tower Motors, where the Mirabito quick-stop is now, then for Ed Smith’s Ford dealership.

In 1960, he began working on cars at home, and in 1966 opened his first Kirn’s Body Shop next to Doubleday Field, where the batting cages are today.

In 1976, he shifted his operations to the lower floor at 21 Railroad Ave., in Cooperstown, NY, where the Bassett Pain Clinic is today, and moved in 1978 to the current location, on Route 28 just south of the village line.

Hoag graduated from high school and in 1978 began working for Ed Kirn, where he met the owner’s daughter, Rosie; the two married, and he’s been with the business ever since. She retired last November after 40+ years at Bassett.

Previous Page Next Page »
Read 748 times
back to top